COVID-19: Chinese Ambassador To Ghana Writes; Together We Win 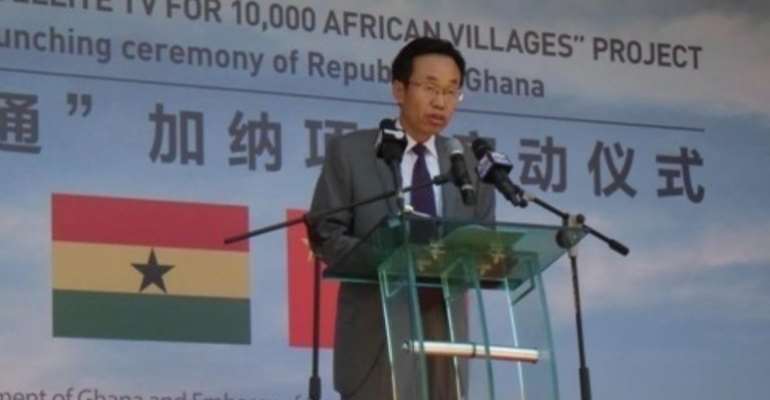 China's prevention and control efforts have made important progress at this stage. In the nation of 1.4 billion people, the daily new confirmed cases keep dropping and most of them are imported from overseas. Hubei province reported zero new confirmed or suspected cases on March 18th.

More than 87% of the 80,000 confirmed cases have recovered and been discharged. Enterprises in different regions are back to work in a well-organized way. Meanwhile, the epidemic broke out in many places across the world and keeps spreading. Some countries are suffering gravely from it.

On March 12th, Ghana confirmed its first two cases of the COVID-19 and then came the news of new confirmed cases. The situation of the victims affects every one of us. I sincerely wish Ghana wins the battle against the epidemic as soon as possible and everyone in this beautiful country well.

Six years ago, I worked in the African Bureau of Foreign Ministry. One day, my superior asked me to be ready to go to Liberia and help the locals fight Ebola. My family and friends were all worried about my safety, but I did not hesitate at all. I firmly believed that there was no border for epidemics and helping African friends was to help ourselves.

After months of hardwork, we finally won the battle with Ebola in West Africa. Since then, my understanding of the community with a shared future for mankind was more profound.

This year, the COVID-19 epidemic again links together the destiny of mankind tightly. What touches us is that the international community, including Ghana, helped China on our battle against the epidemic. H.E. President Nana Addo Dankwa Akufo-Addo wrote solidarity messages to H.E. President Xi Jinping at the first moment followed by assistance and support from Ghana to China in different ways.

The Ghanaian government cooperated with the Chinese government to ensure zero infection of the Ghanaian nationals in China including the students. This is truly a remarkable achievement.

Dr. Kwame Nkrumah, the founding President of the Republic of Ghana, once said that “Our independence is meaningless unless it is linked up with the total liberation of Africa”.

In my view, the same applies to current battle with the COVID-19, because we have been a community with a shared future in the age of globalization. The Chinese people are known with a tradition of returning the favour. We will never forget the friends who helped us at a crucial time.

While combating COVID-19 at home, China is ready to contribute to Ghana's response. I'd like to share China's experiences with my Ghanaian friends. Quick response with a nationwide mobilization

Time is life. If we want to win a complete victory against the epidemic, we must make a quick response with no exception. Under President Xi Jinping's deploying and commanding, the whole nation fights an all-out people's war with the epidemic.

We mobilized the whole nation quickly and took the most comprehensive and rigorous prevention and control measures after the outbreak, such as immediately setting up an inter-agency task force, activating first-level public health emergency response in 31 provinces, autonomous regions and municipalities, mobilizing the entire nation including communities and rural areas to join the prevention and control, popularizing infection prevention knowledge to the public, releasing information about the epidemic timely, locking down Wuhan city, and built the Huo Shenshan Hospital with 1,000 beds and the Lei Shenshan Hospital with 1,600 beds in just about 10 days.

As the WHO Director-General Dr. Tedros noted, China is setting a new standard for outbreak response. Prevention and control based on law and science

The more strenuous the situation is, the more important it is to carry out the work in a law-based, scientific and orderly manner. We uphold social stability by cracking down on assaults on healthcare workers, illegal price hikes of medical supplies and goods key to people’s livelihoods, the making and selling of fake products and the creation and spread of rumours.

Meanwhile, we further regulated donations to ensure that all donated funds and goods will be used for preventing the spread of the contagion in time. In addition, we attach great importance to science and technology in prevention and control.

We speed up the research of test kit and vaccine, combine the traditional Chinese medicine and Western medicine for treatment and select some effective medicines and treatments. Besides, the experts are well organized to answer questions for the public in time, which also provides strong sci-tech support for winning the battle against COVID-19. Coordinating and concentrating resources on major undertakings

“One tree cannot make a forest.” The epidemic prevention and control is not only a health issue but comprehensive work which requires all-round support like total war.

Since the outbreak, no matter the medical workers and supplies, nor the protective equipment and life necessities, we provide supports whatever Hubei and Wuhan need, such as dispatching more than 42,000 medical workers to aid the epidemic fight in Hubei Province, guaranteeing the “Vegetable Basket” and “Rice Bag” of Wuhan people by reallocating the resources nationwide, producing medical supplies like masks and protective suits in a 24-Hour uninterrupted way, providing door-to-door service to the quarantined residents, the poverty and the seniors.

Wherever there's an outbreak, there are party members. There is the centralized and unified leadership of the Communist Party of China (CPC) which could concentrate resources to accomplish large, hard and urgent undertakings. This is the unique advantage of China's system, which once again demonstrates the superiority of socialism with Chinese characteristics. Acting as a responsible major power in a transparent and open way

Since the outbreak, President Xi Jinping has paid high attention to the international cooperation on the epidemic prevention and control and made a series of important instructions on strengthening the communication and coordination with other countries and also the cooperation with WHO.

The Chinese government first released information about the epidemic in a timely, open, transparent and responsible manner, responded to concerns of all sides actively.

Second, we shared the genetic sequence of the COVID-19, seven guidelines on COVID-19 diagnosis and treatment and seven guidelines on prevention and control, contributing China’s wisdom and proposals to securing an early global victory over the virus.

Third, while fighting hard against the epidemic at home, China offered as much help as we can to countries in need, like medicines supplies, medical specialists and scientific research support. With good faith and actual deeds, China won wide supports from the international community and gathered strength globally for the battle against the epidemic.

The epidemic is transient, but the friendship is always around. This year marks the 60th Anniversary of diplomatic relations between China and Ghana. This year is shaping up to be extraordinary.

I believe that, tested by the epidemic, the ties between our two peoples will be even stronger, our journey to common development and prosperity will be more determined, and the course for building an even stronger China-Ghana and China-Africa community with a shared future will be injected greater momentum!

Chinese Ambassador to Ghana, on the COVID-19 Epidemic

More Article
ModernGhana Links
The Wicked, Unneutered, Malawian Caribbean man with a name that shouldn't resemble the pride land King
RSS chief Bhagwat bats for a unified, strong, well-informed society
Mexico-Ghana: 60 years building a success story together
Be Cyber Smart: The Way Out
Impact in public life: The story of Dr. Prempeh
The 4Rs: Embracing a Zero Waste Lifestyle
Passage Of LGBTQI+ Bill: Stop The Intimidations And Let Democracy Prevail
"Protecting the girl child" is not a catchphrase; it is a call-to-action!
Leading In Unchartered Territory
TOP STORIES