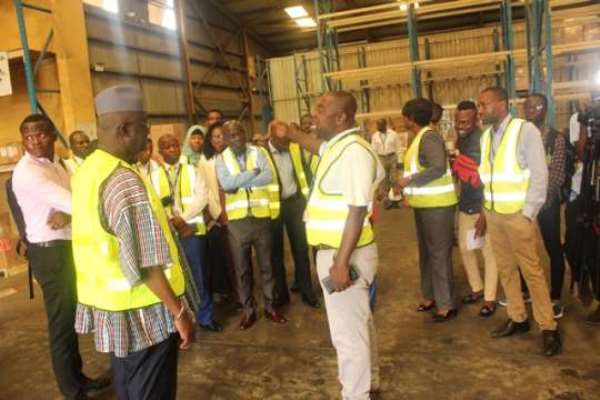 Mr Joseph Kofi Adda, the Minister of Aviation, on Thursday, announcing that no case of contaminated cargo has been recorded at the Kotoka International Airport.

He commended the staff for the measures instituted to prevent the contamination of the novel coronavirus.

“For now, government has not received any information on contaminated cargo at the Airport since the beginning of the pandemic,” the visibly excited Minister stated after a tour of the facility.

“The measures are fairly in place in the manner we expect as directed by President Akufo-Addo, particularly, with the employee education programme and we hope this will continue till the end of the situation”.

“Everything about personal protective gear, public education programmes and hand sanitizers is encouraging”.

Mr Adda said this when he visited the cargo units at the Airport to ascertain their preparedness and protocol measures to prevent the spread of COVID-19.

The Minister, with his team, inspected the McDan Aviation unit, Aviance Ghana and Swissport Ghana, all cargo handling operators.

He, however, expressed concern about the crowding situation at a Customs unit, where more than 20 people had gathered, and urged authorities to ensure the total compliance to the Government's directives on social distance protocols.

Mr Richard Baah, Cargo Manager, Aviance Ghana, briefing the Minister said every consignment that entered the unit went through vigorous inspection procedures with support from officials from the Food and Drugs Authority, Narcotics Control Board, and the Ghana Standards Authority.

He said in the inspection processes, any agencies that suspected any form of cargo contamination reported to Aviance for segregation and appropriate actions taken.

“We are safe and will continue to adhere to the Ghana Health Service's precautionary measures to contain the disease,” he added.

He said in 2019, Swissport received a total of 952 tonnes of cargo from China, but the volume of imports this year is expected to drop.

“We have already began to feel the impact as what we received from January to February indicate a significant drop of 17 per cent,” he explained.

“We are, however, happy that no evidence of cases of the virus was recorded on the cargos so we will continue to implement stringent measures to prevent any unforeseen situation, safeguard the safety of workers and their jobs”.

The Ghana News Agency observed that workers were strictly adhering to all the precautionary measures adopted by the cargo operators at the Airport.

The Agency also observed that all the cargo operators had wall-mounted hand sanitizer dispensers at the entrances and vantage positions for staff and guests as well as water and soap for hand washing.

Government, on Sunday, March 15, announced a number of preventive measures, including a travel advisory, which discourages all arrivals from countries with more than 200 cases, until further notice.

The advice, which took effect on Tuesday, March 17, 2020, said any traveller who, within the last 14 days, had been to a country that had recorded at least 200 cases of persons infected with the disease, would not be permitted into the Ghanaian jurisdiction, except for Ghanaian citizens and persons with a Ghanaian residence permit.

The Government has also instructed airlines not to allow such persons to embark; and also urged border posts not to permit such travellers into Ghana.