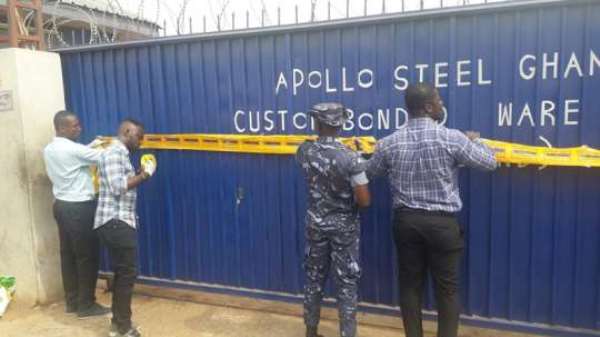 The Ghana Revenue Authority (GRA) on Thursday locked up the premises of Apollo Steel Ghana Limited, a steel manufacturing plant located at Kpone-Katamanso Municipality for non-payment of tax to the tune of GH¢6,000.000.00 since 2018.

Mr Alpha Senanu Hossoo, GRA Senior Officer, Debts Management, Compliance and Enforcement, described the action as the distress act against the Company which was necessitated by the fact that the Authority needed to raise enough revenue for the state.

He said team was working under the instruction of Mr Ammishaddai Owusu-Amoah, GRA Commissioner General to carry out the exercise, against the company due to its management's failure to honour their tax obligation to the state.

To avert the closure of the factory, the Company was to cough out the said tax debt by a banker's draft, something they failed to do when the team visited the premises, adding that until the tax debt was defrayed, the premises would remain closed.

He said prior to the lock up, GRA had engaged the owners of the Company on several occasions, which yielded no positive result, adding that before the current distress action, there was an agreement to pay a certain percentage of the amount but as of Thursday morning, the company had once again failed to deliver.

Mr Hossoo said the owners of the Company tried to negotiate their way through to halt the closure of the premises, by trying to talk with higher authorities within the GRA, but there was no more room for such empathy since they were working under strict instructions.

He said: “We are a law-abiding officers and we take instructions and our instructions are simple: go, take a banker's draft of six million Ghana cedis or lock up the place”.

He warned other business owing the state to as a matter of urgency settled their tax debt because, action could be carried on them anytime soon.

Following the closure, GNA observed that about 100 workers of the company were left stranded at the entrance not knowing what to do.

Shatta Wale is missing, no where to be found – Father
6 minutes ago