Plans for an Asaba massacre memorial are stirring passions in Nigeria

By Jon Silverman - The Conversation 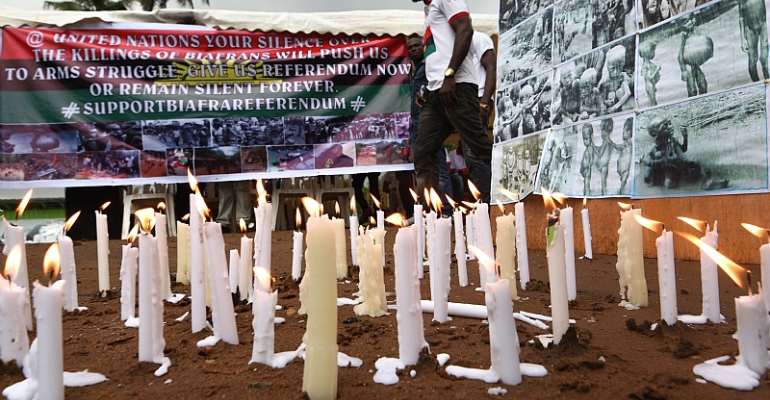 Banners and candles are displayed during a ceremony commemorating the Biafran War - Source:

The city of Asaba is the capital of the oil-rich Delta State in the south-south region of Nigeria. It lies on the western bank of the Niger river. It is not well known beyond Nigeria, but still has powerful resonances for Nigerians because of events in its environs in the first year of the country's civil war in October 1967. Federal government troops pursuing the Biafran army entered the town and, over three days, massacred at least a thousand people. The town was left in ruins and the survivors traumatised.

The events of that terrible time remain close to people's hearts. When Nigeria returned to civilian rule in 1999 after decades of military governance, a body called the Human Rights Violations Investigation Commission – popularly known as the Oputa Panel – received some 10,000 petitions about abuses that had taken place between 1966 and 1999. They included the Asaba massacre. But few cases were examined in any depth. The result was that deep dissatisfaction remained.

The massacre is still little acknowledged and a highly sensitive issue. According to historians Elizabeth Bird and Frazer Ottanelli, the massacre is not well known because it was covered up at the time. They argue that this was done with the connivance of Nigeria's allies and backers, such as the British Labour government of Harold Wilson. The fact that the military commander whose soldiers committed the atrocities, Muritala Muhammed, became Nigeria's head of state in 1975 ensured that the suppression of the truth continued.

The Nigerian civil war broke out in July 1967 when the Igbos of several eastern states, who were mainly Christian, formed a breakaway republic of Biafra in response to massacres carried out by troops of the Northern (Hausa) dominated government. It's estimated that more than a million people died during the three-year conflict, many of malnutrition as a result of an economic blockade. The fighting ended in January 1970 but there continue to be tensions between Christian and Muslim populations in regions of Nigeria.

Several years ago, the former leader of the federal government during the civil war, General Gowon, tendered an apology for the atrocities during a private visit to Asaba. But no further action followed.

Campaigners believe it is time that the massacre was officially memorialised. They argue that the obvious location for a permanent memorialisation is Asaba's historic Mungo Park House .

Mungo Park House is a pre-fabricated wooden structure dating from 1886. It is thought to be the last existing building once owned by the Royal Niger Company. Responsibility for the building was assumed by Nigeria's National Commission on Museums and Monuments in 1997 but without government funding the Commission has been unable to renovate it or develop the project.

For some, building a memorial would be beneficial for people living in the area. As Bird and Ottanelli point out, countries elsewhere in West Africa are discovering the value of cultural heritage. For example, Ghana's active promotion of its world heritage sites has boosted national prestige and brought considerable tourist income.

In contrast, Nigeria lags behind.

In 2017, there was a 50th anniversary remembrance event in Asaba, attended by the Nobel laureate, Wole Soyinka, who observed that

reconciliation is only possible when it is closed by a consciousness of remorse and compensation, no matter how symbolic.

The state governor was there, but there was no representative from the federal administration, indicative of the government stance that the war with Biafra is best forgotten in the interests of national unity.

Given this, the struggle to secure a memorial is likely to continue for some time.

Jon Silverman does not work for, consult, own shares in or receive funding from any company or organisation that would benefit from this article, and has disclosed no relevant affiliations beyond their academic appointment.