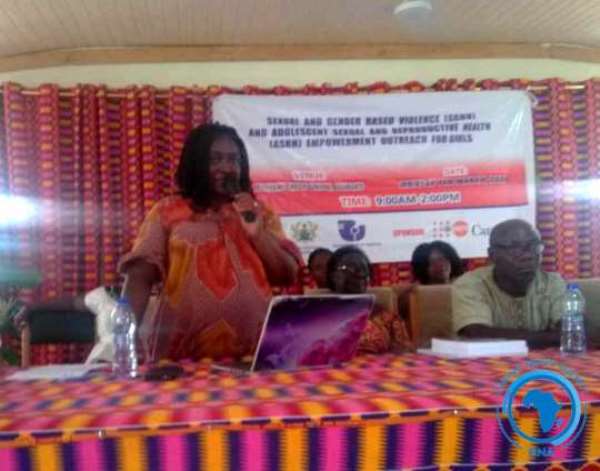 Reverend Ransford Nyarkoh, the District Chief Executive (DCE) for Ajumako-Enyan-Essiam(AEE), has expressed concern about the behaviour of some parents who allow settlement of defilement and rape cases out of Court.

Parents should not let few cedis be paid as compensation by the culprits to mortgage the future of victims, he said.

The DCE gave the warning when he addressed the sexual and Gender Based Violence (SGBV) and Adolescent Reproductive Health School Empowerment Outreach for Girls in the AEE District at Ajumako.

It was attended by 300 girls selected from basic and Senior High Schools in the AEE and organised by Department of Gender in collaboration with the Central Regional Coordinating Council (CRCC).

The Girls Empowerment programme was sponsored by the UNFPA.

Rev Nyakoh said it was sad to note that some parents collected some few cedis from male adults who defiled their girls and appealed to the Domestic Violence and Victims Support Unit(DOVVSU) and other stakeholders to ensure that rape and defilement culprits were punished.

He expressed regret that girls as young as 10 years were seen pregnant in the District to the detriment of their health and that of their unborn babies.

The alarming rate of teenage pregnancy cases among school girls, he said has compelled his office to put stringent measures in place which have helped reduced the cases drastically.

He encouraged girls to report any form of sexual abuse to his office, security agencies or to their parents in order to help deal with such culprits.

Girls were advised to take advantage of the introduction of the Free SHS policy by the government to study hard to attain higher level of education to enable them become responsible adults in the society.

Mrs Esther Amankwa, Acting District Director of Health Services, who spoke on “changes in adolescence and the causes, effect and prevention of adolescent pregnancy” warned girls to abstain from sex.

The Acting Health Director cautioned the youth to desist from bad companies and peer pressure, which could mislead them and destroy their future.

Mrs. Thywill Eyra Kpe, Director of the Central Region Department of Gender, said 80 girls selected from various schools were trained and empowered as mentors and other role models in the district.

The essence of organizing the Girls' summit was to create opportunity for all stakeholders to brainstorm on issues concerning the development of school girls.

It was also aimed at encouraging school girls who have reached their adolescent ages to concentrate on their education rather than on pre-marital sex.

The Gender Department Director hinted that it was possible to have school girls attaining higher education in the District to assume positions in various sectors of the economy in the next 10 years.

This, she said would enable the country to achieve the Sustainable Development Goals (SDGs) by 2030, which aims at ending hunger, eradicating poverty, gender inequality, protection of environment and others.

Ms Sabina Otoo, Ajumako-Enyan-Essiam Director of Education, said the progression of girls was a must and urged them to study hard and say no to pre-marital sex.

She said the percentage of school dropouts among school girls was high but her outfit has put in measures that had curbed the trend and assured that Education directorate was ready to deal ruthlessly with any teacher caught engaging in sexual abuse.

She expressed serious concern about the rate at which school girls were sexually exposed to social media.

Ms Otoo cautioned teachers especially males to desist from sexually abusing their students under the pretext of sending them to their houses to cook or buy food for them.