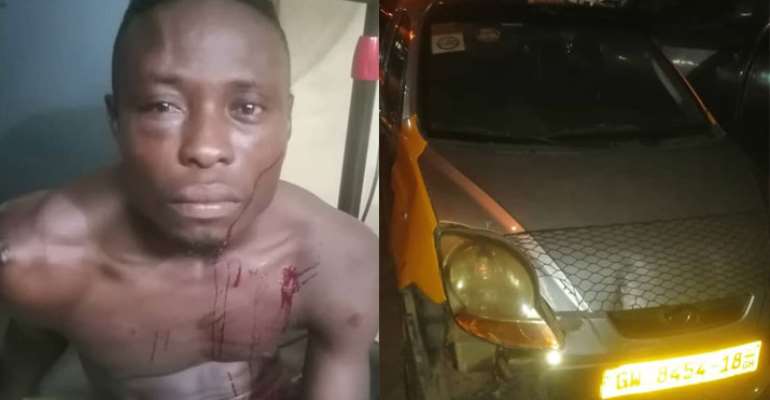 The Accra Regional Police Command has arrested one out of two suspected armed robbers who allegedly snatched a taxi cab from its owner at Agbogbloshie in the wee hours of yesterday Wednesday.

The arrested armed robber identified by the police as Kwame Eric in a company with one Fuseini, an accomplice currently at large, snatched the vehicle from the owner and crashed it into a concrete pillar in an attempt to escape when the police arrived at the scene.

According to the police, Eric who was driving at the time of arrest, lost control of the steering and crashed the vehicle into the concrete block leading to his arrest but his accomplice managed to escape.

The suspect is now being interrogated by investigators at the regional command.

Narrating the incident to DAILY GUIDE, the Accra Regional Police Public Relations Officer, DSP Effia Tenge, said around 4:30am yesterday, a police patrol team on their routine patrol duties within Kaneshie and Agbogloshie areas responded to a distress call by a taxi driver whose Daewoo matiz taxi had been snatched from him by the suspects.

She said, the victim told the police that suspects hired his services from Odorkor area to Agbogbloshie and upon reaching the onion market area—they snatched the taxi with registration number GW 8454-18 from him.

“The victim told us that a motor rider who witnessed the act pursued the suspects as they drove towards arena area until the police were called in for assistance.”

DSP Tenge maintained that upon realizing that they were being followed by the police, the suspect lost control of the steering and crashed the vehicle into a concrete object along the Agbogbloshie arena road.

“Suspect, Eric, who was then driving the vehicle, was grabbed but his accomplice managed to escape.”

She added that the suspect together with the vehicle and victim were later brought to the regional command to give their statements.