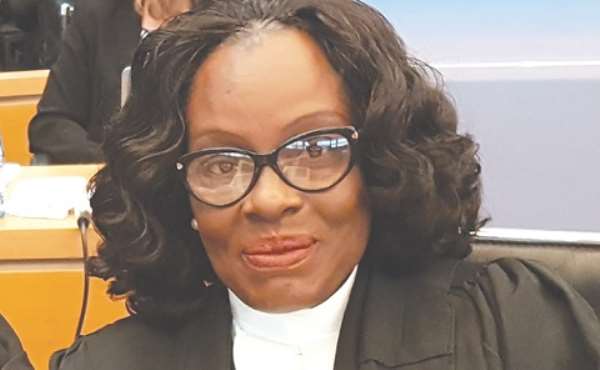 The Attorney-General and Minister for Justice, Ms Gloria Akuffo, has laid before Parliament the Re-Imposition of Restrictions Bill 2020.

The Bill, laid in accordance with Article 21 of the 1992 Constitution, was accompanied by an Executive Approval from the President, dated March 18, 2020.

The proposed Bill, which is being laid under a Certificate of Urgency, is to provide powers to impose restrictions on persons in event of a disaster, emergency or similar circumstances to ensure public safety and protection.

The Government finds it expedient to develop a legal framework to provide expeditious interventions in the event of unforeseeable emergencies.

The Bill is, therefore, intended to provide a legislative framework in consonance with the Constitution for the impositions, as a quick and effective means of intervention to address emergencies.

The Second Deputy Speaker, Mr Alban Bagbin, in accordance with the Standing Orders of the House, referred the Bill to the Committee on Constitutional, Legal and Parliament Affairs to consider it under a Certificate of Urgency and report back to the House.

“We will expect the Committee to work expeditiously and report to the House as speedily as possible.”

Mr Bagbin indicated that the Bill was very important and urged members to pay critical attention to ensure that the House got a very harmonious debate.

He urged the leadership of both the Majority and Minority sides to take control and get more of their members to be part of the consideration stage.

Mr Haruna Iddrisu, the Minority Leader, argued that because the Bill did not meet the minimum constitutional requirement under Article 106(2), the Speaker should not have just referred it to the Committee for consideration but should have directed them to consider whether or not it was a matter of an urgent nature.

Mr Osei Kyei-Mensah Bonsu, in his remark, said the current stage of the process was up to the Committee to determine whether the Bill was of urgent nature or not and urged the Committee to expedite action on it.