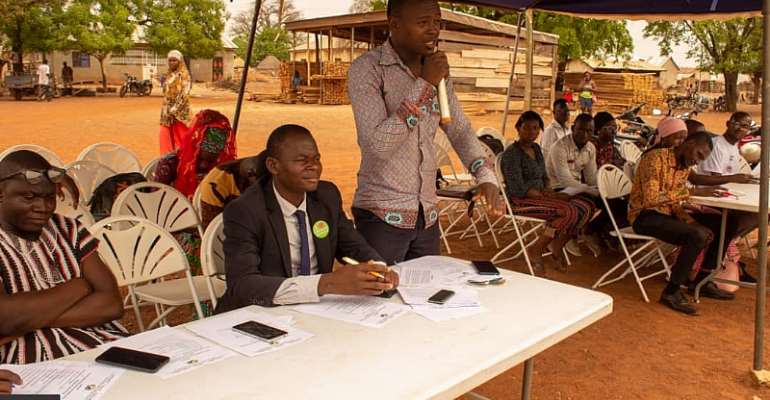 The Sagnerigu Youth Parliament (SYP) on Saturday March 14,2020 held a public sitting at Zagyuri, a community in the Sagnerigu Municipality of the Northern region

The sitting was on the theme " Sanitation, a way to healthy life" and was aimed at educating the public especially, the residents in the community about the importance of sanitation.

The sitting was supported by YEfL-Ghana with funding from the Konrad Adenauer Stiftung.

In his submission, the Northern Regional Director of the National Youth Authority (NYA) E.B.Gyan Ansah

lauded the idea by SYP to hold public sittings in communities

He also advised them to do away from partisan politics since it could affect their contributions to the nation development.

The Representative from Konrad Adenauer Stiftung, Mr. Dominic Amoah in his submission said the Foundation would continue to support the Youth Parliament agenda to help promote Youth participation in national issues.

"It is glad to see these young people having the nation at heart and discussing an issue that is very very important to every single Ghanaian and every single person living in this world thus Sanitation, the way to healthy life. Whichever way, being it flooding, being it how we dispose our refuse, sanitation has been a very cancerous thing that is eating into fabrics of this country. Many are the attempts and proposals and solutions and all that, but they seem to be no proper improvement when it comes to the issue of sanitation" he said

He encouraged the Youth to be interested in what happens in their communities as it affects them directly or indirectly.

The Speaker for the Sagnerigu Youth Parliament Rt. Hon. Issahaku Abdul-Latif in an interview said the reasons why they chose the Zagyuri community was because the community was faced with sanitation challenge, which SYP was seeking to address.

He also said the SYP as part of its parliamentary business for the year would be embarking on several activities including; educative campaign on dangers and causes of substance abuse among students in Senior High Schools within the Municipality

And encouraged his colleagues to put in their best so that, they can achieve their objectives

The Youth Parliament project is initiated to empower the youth to be able to engage with duty bearers in their communities to advocate for development, positive social change and progress and to ensure accountability and transparency.

It is basically aimed at providing the platform to mobilize the youth for action through providing accountability, transparency and equitable society for the ready youth.