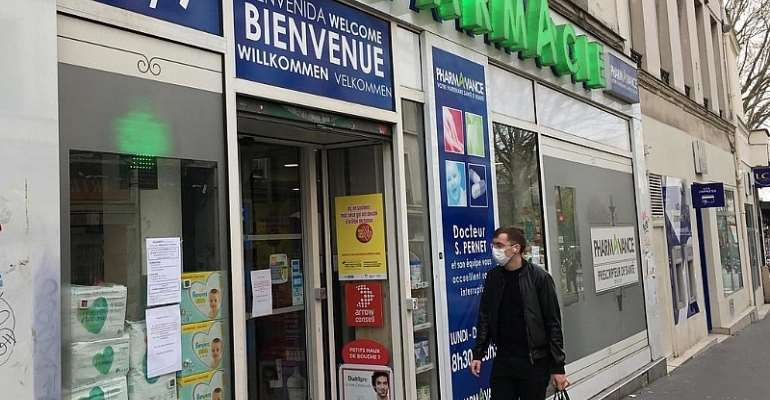 Pharmacies around France saw an initial rush of panic-buying begin to subside on Wednesday, the first full day of nationwide confinement to slow the spread of Covid-19. Now pharmacists are digging in for the next phase of the pandemic.

“No hand sanitiser”. “No masks”. “Please maintain a distance of one metre between people”. Some of the messages printed or handwritten on plain white paper taped to windows of pharmacies in eastern Paris.

Staff in these locations saw an spike in the number of shoppers that began with President Emmanuel Macron's announcement of school closures last Thursday and peaked with Monday's announcement of full confinement.

“People were really scared. It was like they were preparing for war,” says pharmacist Sylvain Pernet. “They seemed to me to become a little selfish, like they wanted to take all the medicine home.”

Pernet says he had 3,000 customers between Friday and Monday, a period that usually draws 1,200 people. Two thirds of them were asking about hand sanitiser and masks, neither of which medical professionals say are essential to protect from the new coronavirus.

But since the confinement measures came into affect on Tuesday, customer behaviour has calmed.

“It seems to be normal. We don't have people coming for hand cream or cosmetics,” he says. “In the line, they are respecting the one metre between each other. I think it's because they are scared.”

Pharmacies affected across France
Pharmacies in the capital were not alone – industry officials reported similar rushes in many of the 22,000 chemists across the country.

“It was worst in the areas most affected by Covid-19, namely in eastern France, the Paris region and Brittany,” says Pierre Béguerie, president of the dispensaries section of France's Order of Pharmacists.

“Monday and the morning on Tuesday were very difficult, but the situation has returned to normal since the confinement came into effect.”

Everywhere the demand soared for hand sanitiser and face masks, and pharmacists reported they will be unable to meet demands for some time.

“Deliveries are either delayed or reduced, because the laboratories cannot keep up,” says André Habib, manager of another eastern Paris pharmacy, whose most recent stocks vanished in a matter of hours.

France's government has requisitioned face masks for medical staff and fixed prices on hand sanitiser, and pharmacists have sought to reassure customers neither product is indispensable for prevention.

“At home, a mask is useless,” Habib says. “When people go shopping, if they stay at the right distance from others, they risk nothing. But people are hysterical. Everyone wants a mask.”

Pharmacists unworried about shortages
France's government has authorised pharmacies to make their own hand sanitiser, but there are shortages of alcoholic solution and plastic flasks, many of which are made in China.

But pharmacists say the shortages do not carry any serious implications for public health.

“The worrying thing would be a shortage of medicine, but there is no such shortage,” Bégurie says. “Hand gels are not indispensable. People can take the same precautions with regular hand-washing. And now that people are outside less, there is less need.”

Slightly more disconcerting in the recent rush was a demand for paracetemol, a common painkiller, prompting the government to authorise sales of one box per customer, two if they showed symptoms.

Pharmacies on the frontline
As the Covid-19 epidemic continues, pharmacies will remain open as one of the locations that residents are allowed to visit for essential needs, a fact underlying the importance and sensitivity of their role.

“Many pharmacists felt forgotten during the panic,” Bégurie says. “They are health professionals on the frontline, they must be considered as such. We need to put into place lasting measures of protection.”

Pernet has set a limit of five customers in his pharmacy at any one time and is considering measures to keep customers at least a metre from staff.

“I think we will have less people now, but maybe more and more contaminated people,” he says, adding the number one advice to customers remains the same.

“We try to explain to everybody that they have to stay home,” he says. “We repeat that a thousand times a day.”