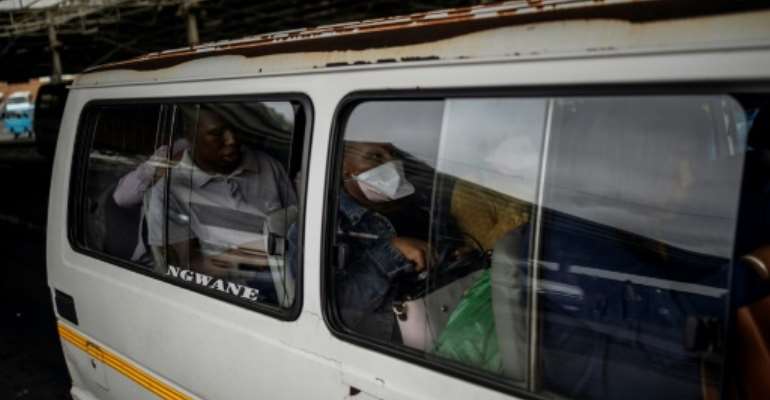 Crammed: A quarter of South Africa's population depends on minibus taxis to get to work or school. By Michele Spatari (AFP)

Fellow commuters quickly cover their mouths and noses with their forearms: the fear of catching coronavirus is palpable here, as infections rise fast.

The driver pumps up the radio to break the silence, the passengers resume paying their fares, and coins and notes exchange hands.

The numbers of coronavirus infections in South Africa are rising rapidly.

More than a quarter of South Africa's 57 million people rely on the minibus to get to work or school, according to the South African National Taxi Association (SANTACO) which governs the privately-run minibus industry.

Passengers sit cheek by jowl in the little buses, which are commonly referred to here as taxis.

The closeness has done little to ease concern as the shadow of the coronavirus lengthens. 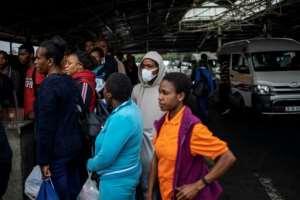 "You can't even cough in the taxi," because people will get suspicious, she said.

Despite fear of the virus which has killed 8,000 people and infected more than 200,000 worldwide, passengers in the minibuses very rarely use masks or gloves.

"I never thought it would get to me or us, or anybody in my surroundings, but obviously I travel every day to work and the possibilities of me being infected or catching it are very high," she told AFP.

'Sneeze! we get scared'

Many cities in other continents are shutting down or heading that way, but Africa, which seems to be several weeks behind the curve of the global spread, has yet to follow suit.

On Wednesday, it was business as usual at two of Johannesburg's busiest bus ranks, in the downtown district of Bree and in the northern suburb of Randburg. 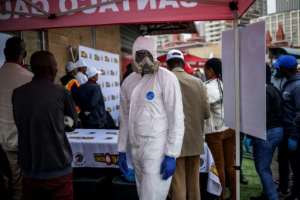 Taxi ranks have deployed cleaners in full protective gear to help with the sanitisation. By Michele Spatari (AFP)

Commuters scurried past each other, some stopping to buy fruit from the hawkers before rushing to board minibuses headed to a variety of locations.

The city's minibus drivers are famous for their boisterous approach to life and their resilience.

But many were unable to hide their fear about coronavirus.

"We are scared as drivers, but we don't know what to do," 28-year-old driver Bongane Nene said, adding that he still has to work to pay bills despite the pandemic.

"We have seen people wearing dust masks when they come into our taxis -- when they sneeze we get scared," Nene said.

While drivers and passengers alike agree that the coronavirus threat is real, the drivers' main worry is the dwindling numbers of commuters as more and more people start to work from home, according to bus owner and operator Simon Makhoba.

'No time to wait' 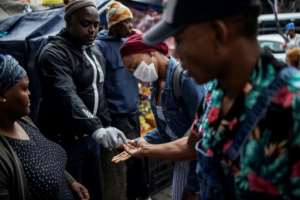 Hand hygiene: Passenger get a cleansing dollop at the Wanderers taxi rank in central Johannesburg. By Michele Spatari (AFP)

Government will also provide hand sanitisers for commuters before they board the bus -- an idea that has not sat well with everyone.

"I won't have time to wait for someone who is busy washing their hands before getting onto the taxi. It won't work," Nene protested.

Makhoba said the drivers are so busy that they often found it difficult to wash their cars every day, let alone disinfect them every few hours.