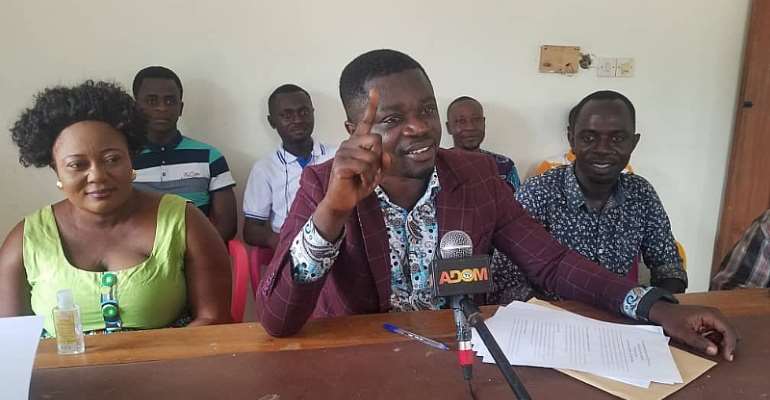 On Tuesday, 17th March, Scores of Party faithfuls, Concerned Executives, Polling Station Coordinators met at the party office at Adansi Asokwa to vent their anger at the acting Ashanti Regional Youth Organizer, Mr. Dennis Kwakwa for some unsavory comments made on radio against the Member of Parliament for the area, Hon. KT Hammond.

Furious Hon. Kwabina Tahir (KT) Hammond told Accra FM’s parliamentary correspondent, Richard Appiah Sarpong in an interview on Tuesday, 10 March 2020 that when he was helping to establish the NPP in the past Chairman Wontumi was nowhere to be found.

His comment comes on the back of claims by Chairman Wontumi that he will ensure Mr Sammy Binfoh Dakwa is allowed to contest Mr Hammond.

“We have seen better Ashanti regional chairmen like Antoh. Who are you to allow disqualified aspirants?” Mr Hammond asked.

Moments after the purported statement of the MP, Mr. Kwakwa sat on various radio platforms and stated that, KT Hammomd wouldn't be the first NPP MP to lose a seat to another party.

Mr. Kwakwa openly spoke against KT and indicated that he will marshall forces against KT Hammond in the primaries.

He added that," if KT is the only person to retain the seat, let us lose it and that would not be the first time the party would lose a seat to our opponents."

Suprisingly, the party chairman in the area, Mr Kwame Owusu, held a press conference on 12th March, 2020 at Adansi Asokwa to render an unqualified apology to Chairman Wontumi on behalf of their MP, Hon. KT Hammond and the constituency who's interested he serves. He stated, "We equally would like to appeal to the entire executives of the party in the region to accept our apology for the poor attitude of Hon.KT Hammond".

On that basis, the NPP Youth of Adansi Asokwa Constituency, Concerned Executives, Patrons, Electoral Area Coordinators and Polling Station Executives led by the Constituency Youth Organizer of the party, Frank Nti Wae said, they are sending a strong warning to Mr. Dennis Kwakwa because of his followed up interviews he has granted on the release.

"The press statement and its ensuing commentaries are not only mischievous, incoherent and lacks substance but disrespectful to Honorable K. T Hammond and the people of Adansi Asokwa Constituency."

We respond as follows:
It is instructive to note that Hon. KT Hammond never 'dismissed' or disrespected Chairman Antwi Boasiako. It is the Chairman who was seen and heard 'dismissing' a question Hon. KT Hammond asked about a petition filed against his contender at the vetting. It is therefore false to suggest that KT Hammond 'dismissed' and disrespected the Regional Chairman. KT over the years has shown utmost respect to party officials and he continues to do so.

It is funny to note that Dennis Kwakwa, someone who has lost three elections to become Ashanti Regional Youth Organiser and who only became the Youth Organiser by appointment by the Regional Chairman, Mr. Antwi Boasiako talks about records. His claim that Hon. KT Hammond wins with 4,000 votes and cannot see himself as a better MP suggests that he knows and sees no shame. Someone who could not win an election which had an electorate of a little over 800 should not be talking about the impeccable records of KT Hammond.

It is not only laughable to hear Mr. Kwakwa, a monumental loser, openly declaring support against KT and indicating that he will marshall forces against KT Hammond in the primaries. If he had such forces, they could have helped him to win one of the elections he contested and lost miserably. It is absurd and reckless on the part of Kwakwa to suggest that if KT is the only person to retain the seat, let us lose it and that would not be the first time the party would lose a seat to our opponents. For this reckless statement, we invite the Regional party to call him to account for this reckless statement even though we know that the Regional Chairman will not do that.

Hon. KT Hammond's statement was that, the Regional Chairman is the one who wants the 'boy'(Sammy Binfo) to contest him even though he is not qualified. If Kwakwa wants to drag the honorable member to the Disciplinary Committee, he has to do it through the national body as applies to Members of Parliament and stipulated in the party's constitution.

*"By the way, as a matter of interest,we will be happy to know if Mr. Dennis Kwakwa will share the reason why he was sacked from Kumasi Girls Senior High School as a teacher with us?*

Adansi Asokwa Constituency had remained calm until Mr. Kwame Owusu became the Chairman of the constituency. He has rallied his few followers and with the support of the Regional Chairman as he claims, be working against KT Hammond even before nominations were opened. Chairman Kwame Owusu had openly said this on countless occasion. It is no wonder that he hurriedly organised a news conference to offer an apology to Chairman Antwi Bosiako, when nothing has happened.

We are aware of the clandestine plan of the Regional Chairman to have him qualified despite all the facts which do not support his qualification. This was corroborated on radio by Hon. Kennedy Agyapong who stated on Oman FM's Boiling Point that he called Chairman Antwi Boasiako about his intervention to get Samuel Binfo to contest the Asokwa primaries, who said yes, he wants someone to contest KT because he (KT) does not respect him. Clearly the decision to allow Samuel Binfo to contest is not based on merit but on Chairman Antwi Boasiako's dislike of KT Hammond.

WE CANNOT ACCEPT THIS!
We are calling on the Regional Chairman and all persons involved to take their hands off our "HANDS OFF OUR HON. KT HAMMOND NOW.