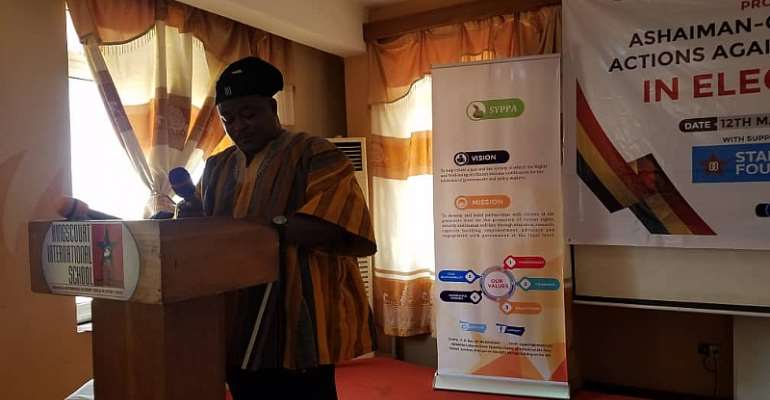 As part of activities to ensure a violent free election in the country, especially in Ashaiman which is tagged as a flashpoint, Syppa Ghana, a non-governmental organization, has organized a one day workshop for stakeholders in Ashaiman and it environs to educate them on the need for peace before, during and after the 2020 general election.

The workshop brought together members from the NDC, NPP and all other political divides as well as the Municipal Electoral Commission and the NCCE.

The Executive Director of Syppa Ghana, Mr. Avisah noted that the workshop which is in collaboration with Star Ghana is focused on weighing the set of activities to ensuring that there is peace before during and after the 2020 election.

Mr. Avisah said a baseline data collection is being launched to map out the constituency and find out potential hotspots and areas that are of interest during an election.

He said as part of efforts to get people enlightened, capacity building seminars will also be organized for members of the community as well as partners on the project to create awareness on the programme.

In attendance were the Member of Parliament for the Ashaiman constituency, Ernest Henry Norgbey, and the Parliamentary Candidate for the NPP in Ashaiman, Alhaji Yakubu Labaran Barry.

The Member of Parliament for Ashaiman, Ernest Henry Norgbey on his part noted that the programme was an innovative one and is hopeful that it will go a long way to address the major challenge that faces the constituency during electioneering periods.

The NPP Parliamentary candidate, Alhaji Yakubu Labaran Barry also pledged his commitment to ensuring a peaceful election before, during and after the election.

The NCCE and the electoral commission also pledged their commitment to ensuring that they play their respective roles satisfactorily to ensure that peace prevails during the period.

Some participants at the programme also pledged their commitment to sticking to the rules and ensuring that they disassociate themselves from any form of activity that is likely to bring confusion in the constituency during the election.