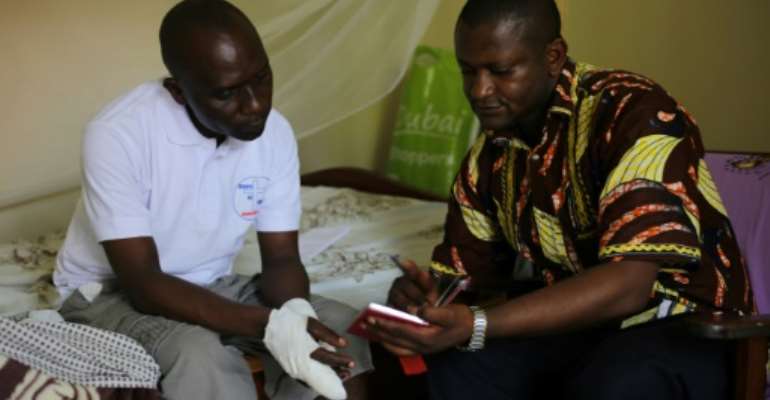 Father Guy-Robert Mandro, shown with a visitor to his home as he recovers from his maiming. By SAMIR TOUNSI (AFP)

With three fingers chopped off his left hand, Father Guy-Robert Mandro bears physical witness to a resurgence of violence in DR Congo that has gone widely unnoticed in a world fixated by the coronavirus pandemic.

Since the start of the month, around 50 people have been killed in the eastern province of Ituri, 15 of them overnight Sunday alone, according to local sources.

Bloodletting in this troubled region has already claimed some 700 lives since late 2017 -- a tale of trauma and sexual violence blamed on a little-known militia.

Mandro, the parish priest in Fataki, about 80 kilometres (50 miles) north of the provincial capital Bunia, said he was attacked after mass about a week ago.

"A group of young people came up to me. They hit me about the head with machetes. I protected myself and that's how I lost three fingers," he said.

The injured man was flown by helicopter to Bunia, where he underwent lengthy surgery. A local priest gave him a room on the bishop's premises to convalesce, with both hands bandaged.

Valerie, a Fataki woman of 44 going by an assumed name for her safety, said she cowered beneath a parish building as the priest was assaulted.

But the young men found her. "Three of the attackers raped me, taking turns," she told AFP.

One of Bunia's many displaced people, Valerie spoke at the headquarters of the Sofepadi, a medical non-governmental organisation that "repairs women" victims of sexual violence.

It is modelled on the famous Panzi clinic in Bukavu, in South Kivu province, managed by gynaecologist Denis Mukwege, the 2018 Nobel Peace laureate.

The Bunia clinic, however, is so poorly equipped that it even lacks an operating theatre.

Another rape victim, Tania, 34, said she gave birth on February 16, just a week after her eldest daughter Sofia, a schoolgirl of 17. Again the names have been changed. 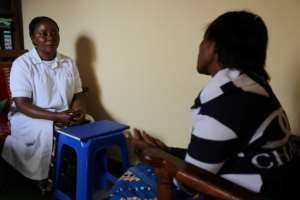 Both Tania, right, and her daughter Sofia (not their real names) fell pregnant after they were gang-raped. Tania is shown here speaking to a psychologist. By SAMIR TOUNSI (AFP)

Tania said that she and her daughter were both made pregnant during a gang rape near Bunia. The assailants beheaded her nephew in front of their eyes.

"Sofia wanted to kill herself when she was told that she was pregnant," Tania said.

The young girl recovered the strength to resume her last year in school and gave birth to a boy "whom she looks after really well", said her mother, who has four other children.

Tania does not remember the precise day of the attack, but places it in late May or early June 2019, during a long spell of violence that resumed in December 2017.

In addition to more than 700 dead, thousands of people have been displaced in the region, according to the United Nations, which has condemned a potential "crime against humanity".

The violence is being blamed on an armed group called the Cooperation for the Development of the Congo (Codeco), which claims to defend the Lendu, an ethnic group that mainly comprises farmers.

Its militiamen roam in small groups, mainly targeting members of the Hema, a herder and trading community.

But Codeco's motives are obscure, and some say it wields religious power over its followers.

"The bishop has said it's a religious sect," said Father Eric, a friend of the mutilated priest.

An official in the territory of Djugu, the epicentre of the violence, said Codeco's adherents worship every Monday and Thursday, when they do no farming.

He added that they ban certain vegetables and pork.

Thousands were killed when militias from the two communities took up arms between 1999 and 2003 -- part of the mosaic of conflict known as the Second Congo War that sucked in several foreign armies and created havoc in parts of the east.

When the latest violence erupted, the Hema community did not revive its militias -- instead, it chose to defer to the authority of the state.

On Saturday, the army said it had killed several more militiamen -- but this is hardly an announcement on a scale to reassure people, who continue to flee to the safety of Bunia.

"The militias are dispersed across the whole territory," said the official in Djugu. "Atrocities are being committed everywhere."