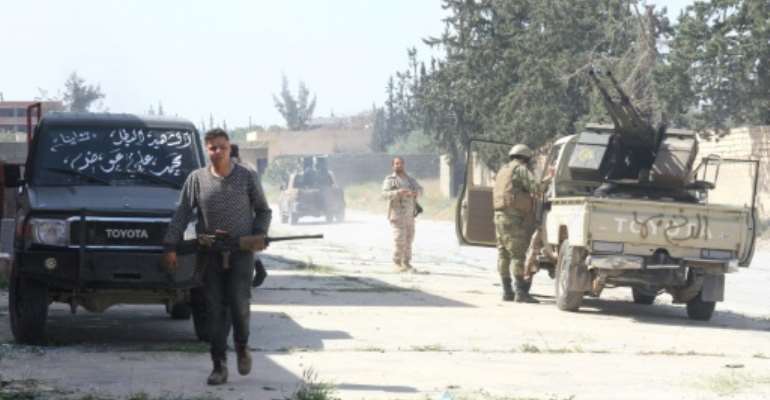 War-torn Libya is largely divided between forces backing the Government of National Accord (GNA, pictured March 15, 2020) and those of eastern-based military commander Khalifa Haftar, who backs a rival administration in the country's east. By - (AFP/File)

The United Nations and nine countries on Tuesday called on Libya's warring parties to cease hostilities to allow health authorities to fight against the new coronavirus.

In a joint statement, the ambassadors of Algeria, France, Germany, Italy, the Netherlands, Britain and the United states, as well as the European Union delegation to Libya and the governments of Tunisia and the United Arab Emirates called for a "humanitarian truce".

They called on the warring parties to "declare an immediate, humanitarian cessation of hostilities... to allow local authorities to respond to the unprecedented public health challenge posed by COVID-19."

The United Nations Support Mission in Libya joined the call, urging asking all parties "to join forces immediately before it is too late to face this overwhelming, fast-spreading threat".

War-torn Libya is largely divided between forces backing the Government of National Accord (GNA) and those of eastern-based military commander Khalifa Haftar, who backs a rival administration in the country's east.

To date, no cases of COVID-19 have been reported by either adminstration, but experts fear an outbreak could be catastrophic due to the country's degraded health system.

A fragile truce entered into force on January 12, but there have been repeated violations.

After closing schools last week, the GNA said on Monday it was closing land borders and halting flights in the west of the country to keep out the virus.

In the east, borders remain open with Egypt, which has reported 166 cases of COVID-19.