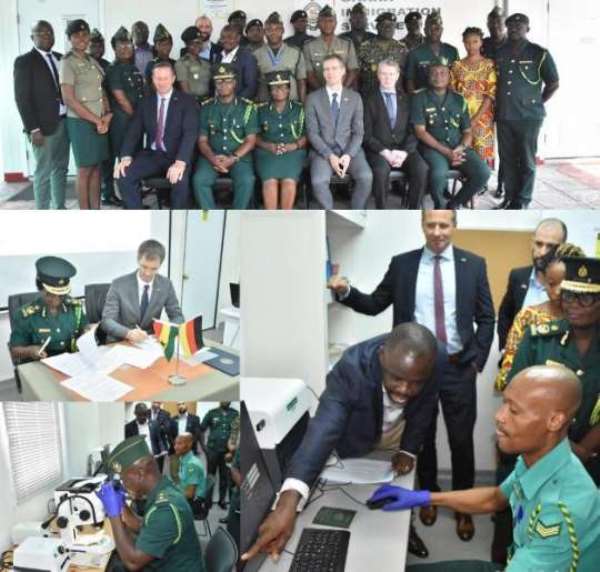 Mr Hans-Helge Sander, the Deputy Ambassador of Germany to Ghana, has touted Ghana as the anchor of security in the sub-region.

“Ghana has shown leadership in border security which is one of the key areas in national security”, he said.

This was contained in a statement signed and copied to the Ghana News Agency by superintendent Michael Amoako-Atta, the Head of Public Affairs, of the Ghana Immigration Service (GIS).

The Deputy Ambassador, according to the statement made the remarks on Wednesday, when the Federal Police of Germany donated state-of-the-art document fraud detection equipment to the Training Centre of the Document Fraud Expertise Centre (DFEC) of the GIS.

The equipment included electronic microscope, modular stereo microscope and mobile microscope, among others which would aid in document forensic training of Officers of the GIS.

Mr Sander, the statement said, lauded the Service for achieving significant successes in the area of border security, saying: “the Embassy is happy to support Ghana in the fight against document fraud.”

He advised the GIS not to renege on its capacity building of Officers towards effective scrutiny of travel documents.

She gave an assurance to the donors that the equipment would be put to good use for the benefit of Ghana, comity of nations and other stakeholders in the migration industry.

“It will help bolster activities of the Training Centre,” she added.

The DCGI, according to the statement, indicated that the donation was just on time to help arrest the dynamism in migrant crime, adding that the support was a demonstration of international cooperation in tackling transnational crime.

“More needs to be done to ensure neighbouring countries receive only desirable immigrants”, she added.

She called on the personnel to go beyond just detecting fake documents and prosecute offenders and secure conviction.

She also advised personnel to take good care of the equipment and utilise it to deliver positive results.

Superintendent of Immigration Frank Apronti, the Second-in-Command of Document Fraud Expertise Center, explained that all migration-related crimes, including drug trafficking, human trafficking, smuggling and terrorism, were rooted in fraudulent documents, the statement said.

“These devices will simplify document examination and their mobility will prove very useful in training officers across the borders”, he added.

Present at the ceremony were DCGI in charge of Command Post and Operations, Mr Laud Kwesi Afrifah, Officer-in-Charge of DFEC, and Chief Superintendent of Immigration (CSI) Kwabena Somuah Amponsah.