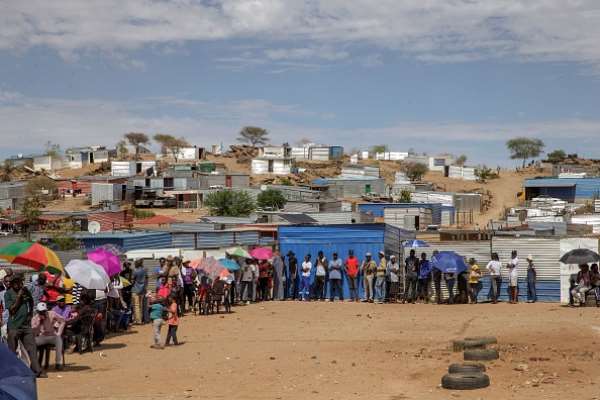 Namibia turns 30 this month. Its former liberation movement, the South West Africa People's Organisation SWAPO , has been in power all these years and the country has been relatively stable, with a wide range of civil liberties.

But not all is well in the state of Namibia. Despite what seems to be a positive track record, many will not celebrate this year. As President Hage Geingob prepares to take the oath for a second term in office on Independence Day (21 March), the republic is more divided than ever.

The national assembly and presidential elections of 27 November 2019 were a rude awakening . For the first time, the ruling party massively lost votes. The two-thirds majority secured in the first parliamentary elections in 1994 and consolidated towards an 80% dominance in 2014 melted down to 65%.

For the first time Geingob, as presidential candidate, obtained fewer votes than his party. His 87% of 2014 shrank to a mere 56%. He warded off the challenge by another member of the party who registered as an “independent” candidate, but enters the second term in office much weaker than before. The party faces internal battles eroding his authority.

The things that have gone wrong

Recent years have been rocky economically. Fiscal prudence was neglected and despite continued warnings the government lived above its means. By 2016 a full-blown recession kicked in. Populist narratives backfired. Promises were no substitute for realities. Geingob's Harambee Prosperity Plan , announced during his first year as president, remained wishful thinking.

Almost a million people (40% of the 2.3 million inhabitants) have been estimated to live in shacks. Geingob declared this a national humanitarian crisis and promised to deal with it. No visible improvements have happened since. Over half of the population has no access to proper sanitation and an outbreak of hepatitis E in 2018 continues to take its toll.

Despite all evidence to the contrary, he confidently claimed

a social compact where 'No One Should Feel Left Out' and where citizens live in harmony as 'One Namibia, One Nation'.

But after his first term in office the country is further away from this than ever since independence.

Namibia ranked 130th out of 189 in the 2019 Human Development Index. Discounted for inequality, the value declined by over a third. Nearly 40% of the population were classified as multi-dimensionally poor – a definition that includes having insufficient access to education and health services, energy and water – and another fifth as vulnerable to multidimensional poverty.

In late 2019 a major fraud in fishing quotas, known since then as #fishrot , made international headlines. It involved the biggest Icelandic fishing company, the Namibian ministers for fisheries and for justice, several high-ranking officials from state-owned enterprises, and lawyers involved in money laundering.

A documentary by Al Jazeera disclosed delicate details. When the ministers resigned , Geingob thanked them “for their patriotism and contribution to the work of government”. A few days later they were arrested and remain in custody awaiting trial.

In mid-2019, the minister of education, arts and culture, Katrina Hanse-Himarwa, resigned from office after being found guilty of corruption. But she remains a member of parliament. Much to the indignation of the wider public, she was appointed earlier this year to the parliamentary committee on constitutional and legal affairs.

Invective no substitute for politics

undergo extensive soul-searching to define our place, purpose and role in the quest for a better life for the citizens of this country.

Opening the first cabinet meeting of the year, Geingob explained :

… we as a government and as individuals need to reflect through critical enquiries on the quality and efficacy of our work. For example, to what extent have we done what the people required from us to meet their basic needs?

The honest answer as his second term gets under way is that Namibia, considered for many years a success story internationally, has shown wear and tear. The “limits to liberation” have poisoned the social fabric. A common Namibian identity, welcomed with enthusiasm 30 years ago, has been perforated by divisions along class and ethnicity, or both.

Cronyism and self-enrichment of a new elite is no prosperity plan beyond individual greed in “a rich country with poor people” , as a study by the local Labour Research and Resource Institute dubbed it. The “born free” are sick and tired of politics in which the first and second “struggle generations” promote a heroic narrative stuck in the past.

While a social, inter-generational contract vanishes, insults are hurled. During the election campaign, the SWAPO secretary-general referred to the independent presidential candidate as an insect . His supporters were not shy to retaliate. At a public rally in early March, Geingob was insulted as a dog .

But invective is no substitute for politics. Dehumanisation of others dehumanises oneself. This cannot build a sustainable future for democracy and human rights. And it certainly offers no political alternatives. As the local newspaper Namibian Sun commented :

What the country can ill afford is a political circus that may offer entertainment and newspaper headlines, but which, at the end of the day, further polarises support bases and voters.

In the interest of the people, a new social contract for the benefit of all should be the priority. After 30 years of independence, Namibians deserve better.

Henning Melber is a member of SWAPO since 1974.

Your God-fearing attitude, refusal to tenaciously cling to p...
49 minutes ago