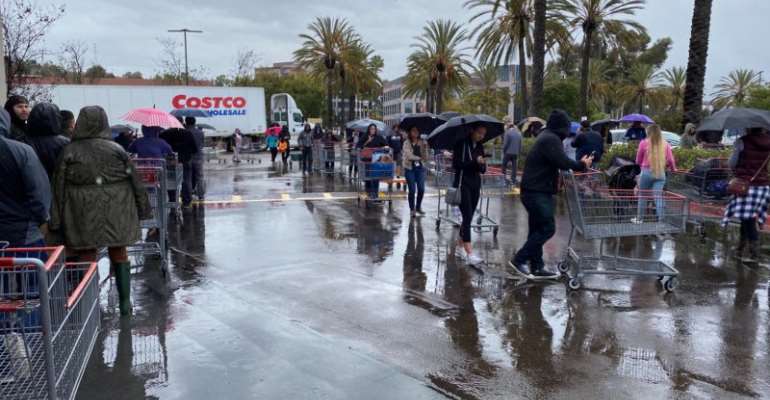 The outbreak of the deadly Corona Virus (COVID-19) in the world in December of 2019 has caused and continues to evoke fear and panic among the world populace. Starting with just a case in Wuhan, China to 184,078 cases across the world with some 7, 182 deaths as of 10:29 am on March 17, 2020. The whole world appears to be heading towards a lockdown. Strict measures have been issued by governments to their citizens and many countries including Ghana have declared a state of emergency.

At the outset of 2020, no one anticipated this level of public health disruption. World leaders made economic projections and though many left some room for force majeure, I dare say the magnitude of such commotion was not contemplated. The events of the last few months have shown the limitations of man and even science.

Though this is not the first time the world is witnessing a pandemic, the nature of the globalized world today has made the infection quite swift and the advent of technology even though helping to disseminate information, the nature of the situation is such that panic is also being shared.

COVID-19 is ravaging economies and world markets. Italy, the hardest-hit country after China, is on lockdown after recording 27,980 cases and 2,158 deaths according to worldometres.info as of 9:31 am on March 17, 2020.

According to a BBC report, EU countries are considering closing borders with Italy. This will affect trade significantly.

The report also says Italy is likely to go into recession. Northern Italy is the country's economic engine, with a per capita GDP of approximately 35,000 Euros or 38,000 dollars, and the North is the hardest hit. Major trade events such as the Milan Furniture Fair have been cancelled or postponed, business trips have been scrapped, and uncertainty is rife. Furthermore, virus-related cancellations are already hitting the country's tourism industry, which accounts for 14% of GDP.

Major flights to Italy have all been cancelled leaving the country as an island.

In China, the origin of the virus, Economists say the economy is expected to grow by 4.5 percent by the end of March compared to 6 percent last year – the slowest since the financial crisis.

Already China is under the pain of the US Trade sanction.

With much of the country in lockdown, the virus could affect up to 42 percent of China’s economy, according to Standard Chartered.

Companies may struggle to make payments on loans leading to a rise in what is called non-performing loans of 1.1 trillion dollars according to Standard and Poor’s.

Chinese airlines have been forced to ground planes and are expected to lose 12.8 billion in revenue.

Globally, the airline industry is set to lose $29bn, according to the International Air Transportation Association (IATA). And the effect of COVID-19 is being felt regionally.

Another world power hit by this deadly virus is the United State of America.

International Monetary Fund Managing Director, Kristalina Georgieva says the outbreak is the world's ''the most pressing uncertainty.” The economic disruptions caused by the virus and the increased uncertainty are being reflected in lower valuations and increased volatility in the financial markets. While the exact effect of the virus on the U.S. economy is unknown, it is clear that it poses tremendous risks.

According to the New York Times, if people stop travelling and going to the dentist, the gym or even March Madness basketball games, the impact could be enormous.

Remember that sports is big business in the US. People spend upward of 10 times as much on sporting events.

And if 60 million Americans stop spending 19 billion dollars a year on gyms, these gyms will collapse. The New York Times further states that the US government has earmarked some 8 billion dollars to fight the virus. Retail and restaurants, for example, have comparable shares of gross domestic product in the US.

South Korea, the hardest-hit country in Asia after China is beginning to feel the impact of the various. In the first quarter of 2020, it was expected that South Korea will see a loss of around 2.9 trillion won in tourism revenue.

In addition, the number of tourists visiting South Korea was expected to decrease by two million. As of March 2, 2020, South Korea confirmed.

On March 4th, South Korea announced a stimulus package of 13.7 billion dollars to cushion the impact of the largest outbreak of coronavirus as efforts to contain the disease worsen supply disruptions and sap consumption.

According to straitstimes.com, South Korea has the most cases of infections outside the mainland China in Asia, weakening consumption and prompting Bank of Korea Governor Lee Ju-yeol to issue a warning last week that Asia’s fourth-largest economy could contract in the first quarter.

About a dozen brokerages from BofA Securities, Capital Economics to Goldman Sachs now see South Korea growing at a slower pace than last year’s paltry 2.0 percent, which was the worst growth since the global financial crisis.

Of the 13.7 billion dollars proposed, 3.2 will make up for the revenue deficit while 8.5 will be extra fiscal injection.

An additional 10.3 in treasury bonds will be issued this year to fund the extra budget.

The challenges confronting the Boris Johnson led administration in the UK have been enormous, a bitter exit from the European Union and the need to get new trading partners.

On Wednesday, March 11, 2020 the BBC reported of how Health Minister and Conservative MP Nadine Dorries was diagnosed of the virus after showing signs.

The Bank of England has also announced an emergency cut in interest rates to shore up the economy amid the coronavirus outbreak.

Policymakers reduced rates from 0.75 percent to 0.25 percent, taking borrowing costs back down to the lowest level in history.

The Bank said it would also free up billions of pounds of extra lending power to help banks support firms.

The Bank of England has slashed interest rates in an emergency move to stave off the economic impact of the virus.

Johnson’s government expects the virus to “spread in a significant way” in the coming days and weeks.

Officials are considering plans to order the public to work at home for at least three months.

On Wednesday, March 11,2020 Chancellor Rishi Sunak unveiled a 30-billion-pound package to boost the economy and get the country through the coronavirus outbreak.

He is suspending business rates for many firms in England, extending sick pay and boosting NHS funding.

Mr Sunak, has had to hastily re-write the government’s financial plans to deal with coronavirus.

Of the 30 billion pounds, 12 billion will be specifically targeted at coronavirus measures, including at least 5 billion for the NHS in England and 7 billion for business and workers across the UK.

According to Reuters, the Japanese government has announced a 4-billion-dollar package to cope with the impact of the coronavirus outbreak. The aim is to focus on support to small and mid-sized firms.

The package aims to boost growth and stave off corporate bankruptcies as Japan's economy suffers from a decline in tourism amid the outbreak.

The government will tap the rest of this fiscal year's budget reserve of about 270 billion yen to help fund the package,

Japan's coronavirus cases are 852 as of 17 March along with 28 deaths, while 696 cases have been reported among the guests on the Diamond Princess cruise ship anchored at Yokohama Port.

Japan was the second country to report a confirmed coronavirus case outside China. The first case in Japan was reported on 16 January 2020.

Japan also has the third-highest number of coronavirus cases in Asia outside China, a significant number of them being on the Diamond Princess cruise ship.

Seven deaths have been reported on board the cruise ship.

Speaking on Eyewitness News on Citi FM on Wednesday [March 11, 2020] President of GUTA, Dr. Joseph Obeng noted that the situation may worsen if the disease is not contained.

“About 60% of our traders do physical travelling to the open market in Asia to buy their goods. These people are not travelling at all. So they're not going to bring in any goods and so if there is a shortage of goods now, until the time that this epidemic is contained, they will not be able to restock for the next couple of months. So it all indicates that by the middle of May, we are going to face some shortage. And because of demand and supply, prices are going to go higher,” he said.

President Akufo-Addo in a State broadcast on Wednesday, March 12, 2020 announced of a 100-million-dollar package to address challenges that may come about as a result of the coronavirus spread. He said the country's economy is on the lookout for the possible shock that the virus may bring about.

A day after his address to the nation, the first two cases of the virus were reported by the Ministry of Health.

The President subsequently announced some sweeping measure including ban on public gatherings such as church services, funerals, parties and even schools. Schools including universities have since closed, all in a bid to contain the virus. Already, businesses are beginning to dread what effect a prolong outbreak will have on their businesses and calls have also been made for the government to consider revising its budget estimates for the year.

Cases in Ghana have risen to six.

Experts are currently working to find a vaccine for this deadly virus which is affecting all countries across the globe.

It's the prayer of all that a solution is found and the deaths reduced.

May God be with us all.