Blow The Whistle On Corruption

But Is It That Easy?
By Gordon Offin-Amaniampong 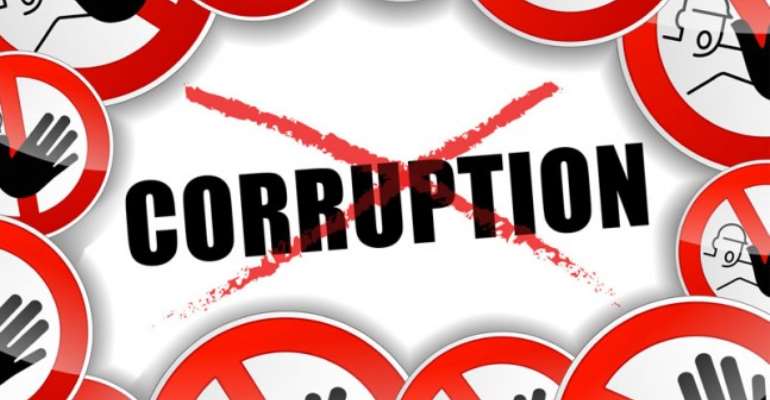 Our leaders haven't really walked the talk when it comes to fighting corruption in our part of the world. And if they won’t show the desire to do so now, then when shall they be ready? Who and what are they waiting for? Or they just don't have the mojo to do it?

Indeed, several factors could account for this ineptitude or ill-preparedness.And the latter seems to be the case. In the midst of the doubt or state of ambivalence, one anti-corruption agency is flexing its muscles to take the bull by the horn.

The Ghana Integrity Initiative (GII) Transparency International local chapter says it's deployed what I describe as a new group of 'apostolic crusaders' to launch an all-out assault on this canker that's plagued Ghana and continental Africa.

Mary Awelana, Programmes Manager GII, says the agency has shifted gears and it's poised to tackle the problem head on.How would they do it?

According to her, the anti-graft agency focused on students at this years International Women’s Day celebrations--- equipping the 'crusaders' to enable them penetrate campuses with the anti-corruption campaign.

However, this writer argues, the fight isn't going to be easy. And here's one of the reasons: It's been 14 long years (in 2006) since Ghana passed its Whistleblowers Act to enable public servants to disclose information about unlawful activities or dishonesty. Suffice to say it's become a toothless bulldog.

Truth is, it takes more than blowing the whistle.
And it takes more than penetrating schools and colleges. If it were that easy, I can guarantee we'd all be carrying our vuvuzales---hit the streets (like Joshua and his men did to bring the walls of Jericho down) and blow the horns all day long to decapitate corruption.

Why? Is it because we don't care about the marginalised majority in society?

That seems to be a fact. But there's more to it.

Do whistleblowers have cover in Ghana?
The response is no. And it's the main bane.
There's no guarantee that whistleblowers will be covered if they make discloures or volunteer information about corrupt practices by public office holders. And this perhaps explains why we find ourselves neckdeep in the cesspool.

Basically, this act seeks to protect public servants or government employees from reporting wrong doing or any financial malfeasance. But citizens as we are all aware have probably never dared to draw the scalpel because they could face repercussions.They could be subjected to reprisal for reporting wrong doing.

Any significant gains since?
Hard to say yes to the question. It seems to me that we've been scratching the surface of the putrid instead of uprooting it.There exist a gamut of institutions to fight the canker but they barely have the teeth to bite public office holders who are believed to be corrupt.

So, in that vein, I can say the yields have been insignificant.

Of course, it's probably easier to say blow the whistle on corruption than to bite the bullet. Again, it's easier to say: 'Go ye therefore to the four corners of the world and preach the word'.

Sounding biblical Mrs. Mary Awelana evoked these powerful words: "Be bold, speak out, stand out, reject and resist corruption." It's a great call by GII, I should point out. But could it stand the test of time?

She said this at a forum organised by the GII in Ho for selected young women from tertiary institutions in the Volta Region.

The GII Programmes Manager said the impact of corruption affected marginalised groups, of which women formed the majority, and the agency as part of its programming for the International Women’s Day celebrations, was “shining the light” on young women.

“Corruption affects poor and vulnerable groups, which women dominate, it hinders progress towards gender equality, and is also a barrier against the full attainment of their civil, social, and economic rights”, she remarked.

Mrs Awelana said the GII focused this year’s celebration on students, to equip them to penetrate campuses with the anti-corruption campaign.

The forum, which was supported by Global Affairs Canada, was held under the theme: “Empowering Young Women to Sustain the Fight against Corruption”, and was attended by female students from the University of Health and Allied Sciences, the Ho Technical University, and the Evangelical Presbyterian College.

“Going forward', she said 'more women would be informed and made aware."

Mrs Awalana asked the young women to “be bold, speak out, stand out, reject, and resist corruption.”