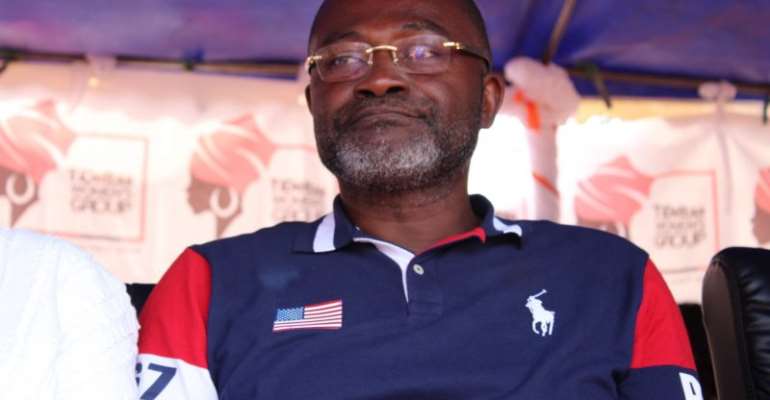 Kennedy Agyapong (Hon), the Member of Parliament for Assin Central in the Central Region has been proclaimed the best criminal investigative personality in Ghana by Rockson Adofo. He is the man with the clout to obtain credible investigation results without any blemishes or doubts.

Unlike the once held in high esteem Ghanaian ace criminal investigative journalist, Anas Aremeyaw Anas, Kennedy does not conduct his investigations in a vacuum. Thus, he doesn't start an investigation in the absence of a crime having been committed, or well in anticipation of a crime being committed.

He does not arrange to set traps for innocent people to entrap them to later investigate them, blackmail them and to extort them as proven to be the modus operandi by Anas and his Tiger Eye PI team.

Among the major achievements of Kennedy, an MP and a self-made criminal investigator are the following:

1. He exposed the notorious political criminal Alfred Agbesi Woyome for duping Ghana to the tune of fifty-one million two hundred thousand Ghana New Cedis (GHS51.2 million). Woyome fraudulently in connivance or collusion with some NDC politicians claimed that money from the Government of Ghana under the administration of the late President Evans Atta Mills. He claimed it for judgment debt payment without actually having done any work for, or entered into any contract to do any work for, the Government of Ghana. Mrs Betty Mould Iddrisu, then Attorney General, Barton Odro (Oduro), Deputy Attorney General and Alex Segbefia, then Deputy Chief of Staff, allegedly facilitated the ploys by Woyome to swindle Ghana of that amount of money.

2. Kennedy brought to light the over two years constant failure, but criminal evasion, of duty payments on imported goods into the country by Mr Ibrahim Mahama, the younger half-sibling of former President John Dramani Mahama. He had cleared his heavy duty imported goods into the country for the past two years prior to his exposure, by issuing twelve dud checks that amounted to twelve million Ghana New Cedis (GHS12, 000,000). Ibrahim Mahama accepted liability and ran to pay the amount alleged to have been evaded like a frightened dog scuttling away from danger with its tail tucked in-between its hind legs.

3. Kennedy exposed the fraudulence by the supposedly Ghanaian ace criminal investigative journalist Anas Aremeyaw Anas. Anas had in most of his criminal exposés been setting up people, blackmailing them and extorting them. Without any crime committed, he sets up one and then investigates. However, his cup became full and started to overflow. It was then that Kennedy said enough is enough with the dangerous crimes in committal by Anas hence he exposed him. Now, Anas is seen in the eyes of many a discerning Ghanaian as the crime itself if not a damn unmatched criminal in Ghana. He is like a police officer put in charge of arresting armed robbers but he has himself turns into an armed robber.

4. Kennedy has just exposed the fake John Dramani Mahama's chief Prophet Emmanuel Badu Kobi as a big time criminal. He had not been paying a pesewa in duty payments on almost all his luxurious cars imported into the country during and after former President John Dramani Mahama's NDC government. He is also using a fake car registration number on one of his numerous expensive cars. This is a man of God indeed! He continually insults President Nana Akufo-Addo that he is mismanaging the country; he is the worst President Ghana has ever had; he is corrupt etc. He levels any silly accusations that come into his warped mind against the President not knowing him, Badu Kobi, with his fake prophecies and criminal behaviour is making Ghana harder for many.

From the above investigations personally conducted by Kennedy with credible positive results obtained, there must be no hindrance to me bestowing on him the title, "Best Criminal Investigator in Ghana"

Finally, may I request of him if possible, to turn his attention to Ntunkumso in Effiduase Ashanti where a two-and-half-year-old kindergarten-going boy has gone missing from his school about a week ago to help with investigations into the disappearance and possible locating of the missing child? I trust his investigative prowess. With his intelligence network, he may be able to come out with a good result of some kind.

More grease to his elbows.