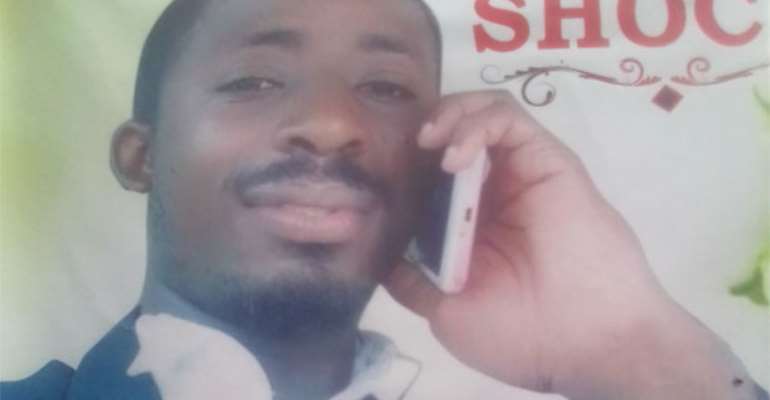 Police in Sunyani, Bono regional capital, are in a manhunt for a suspect, Sammy Tugah, who allegedly stabbed a 30-year-old teacher, Kafas Adenyo, to death last Friday.

Sammy Tugah, who resides at Abesim a town near Sunyani, according to information gathered by the paper, always visited a popular brothel in Sunyani No 2, “Peace Guest House”, where lot of Nigerian ladies ply their trade.

Explaining circumstances that led to the untimely death of the teacher, his mother, Vivian Amakyi, who lived closer to the brothel with his son, explained that her son was asleep at about 10:30pm on Friday night when somebody came and woke him up to go and settle a quarrel between the suspect and a Nigerian lady whose phone he snatched and so resulted in a quarrel.

Meanwhile, the body of Kafas has been deposited at the Bono regional hospital for preservation pending further investigation.

Upon reaching the scene and trying to calm down nerves, unknowing to him, the suspect with knife in his pocket, pulled it out and stabbed his throat, killing him instantly. As at the time DAILY GUIDE visited the scene, there was blood spilt all over the ground. Sammy took to his heels after the act and the police are still looking for him. The police later transported the body to the morgue.

As a result of the incident, all Nigerian ladies living around the area have vanished while police have blocked the scene.

President Akufo-Addo’s sterling leadership saved us from COV...
38 minutes ago