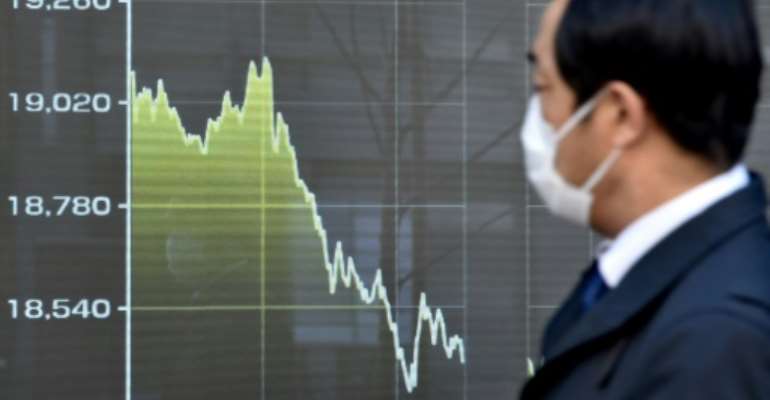 Markets were not euphoric about the Fed decision. By Kazuhiro NOGI (AFP)

The US Federal Reserve and other central banks unveiled emergency measures to prop up the coronavirus-battered global economy, as the three worst-hit European countries recorded their deadliest days of the pandemic.

The virus has upended society around the planet, with governments imposing restrictions rarely seen outside wartime, including the closing of borders, home quarantine orders and the scrapping of public events.

After the COVID-19 pandemic began in China late last year, Europe in recent weeks emerged as the biggest flashpoint and the death toll on the continent surged over the weekend.

Italy on Sunday announced 368 deaths over the previous 24 hours, the worst single-day toll for any country of the crisis and far exceeding the deadliest day in China recorded in February.

Globally, there have been more than 6,500 confirmed deaths from the virus. The weekend saw a tipping point with a majority of the fatalities now outside of China. 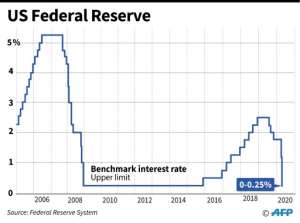 With the virus infecting nearly every sector of the global economy, concerns are growing the world will be catapulted into a damaging recession, leading to stock markets enduring horror losses and wild swings.

The Fed attempted to stem the panic with drastic measures announced before Asian markets opened on Monday, slashing its key interest rate to virtually zero.

"What's happened with the Fed is phenomenal news," US President Donald Trump said Sunday at a regular briefing of his coronavirus task force. "I can tell you, I'm very happy." 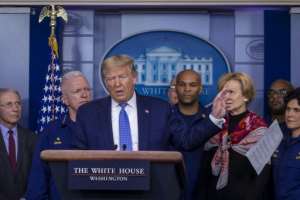 But investors remained in panic mode, with the futures markets on the Dow Jones Index predicting another sharp move downwards and Asia-Pacific stocks tumbling again.

Australia's main share index fell 9.7 percent on Monday, its largest-ever percentage drop, with investors fearing that governments had few other tools to fire up the global economy.

"The biggest concern has to be that the big G7 central banks have exhausted their policy tool kit, especially the biggest and most influential one of them all, the Fed," said AxiCorp's Stephen Innes.

Stocking up on weed

Normal life is at a standstill in much of western Europe, with France ordering all non-essential businesses closed and Spain banning people from leaving home except to go to work, get medical care or buy food. 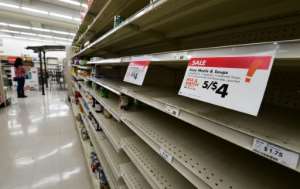 Panic-buying has been seen around the world as people stock up on essentials fearing a lengthy period of enforced quarantine. By Frederic J. BROWN (AFP)

Despite Trump's insistence there is enough food to last through the pandemic, panic-buying has been seen around the world as people stock up on essentials fearing a lengthy period of enforced quarantine.

Larry Grossman, manager at a Manhattan supermarket, said he had never seen anything like it in 40 years.

"I have been through Hurricane Sandy... through 9/11, I have never seen shopping like this," he told AFP, as he restocked the store's empty shelves.

In New York and Los Angeles, bars and restaurants have been closed, while several casinos in Las Vegas have shuttered.

In the Netherlands, cannabis smokers aiming to keep calm and carry on queued up outside Dutch "coffee shops" on Sunday after the government ordered their closure.

"For maybe for the next two months, we're not able to get some weed so it should be nice to at least have some in the house," said Jonathan outside a "coffee shop" in The Hague.

There was pandemonium at several airports as travellers scrambled to get home with countries increasingly slamming shut their borders to prevent the virus spreading. 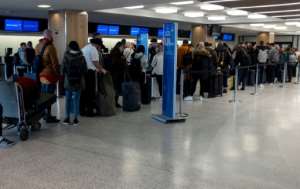 In the US, passengers complained of massive queues as staff battled with new entry rules and stipulations on medical screening. By Johannes EISELE (AFP)

In the US, passengers complained of massive queues as staff battled with new entry rules and stipulations on medical screening, leading some to worry they were exposing themselves to the virus in the crowds.

Joanna, a British student in Cyprus, said she was scrambling to get home, fearful of further restrictions on movement.

"I think if I stayed here and if it was a lockdown, I think I would be really upset, the fact that I could not go home and see my family," she told AFP.

There were continuing signs of improvement in China, with only four new cases recorded in Wuhan -- where the virus was first detected in December -- although imported cases rose.

And there have been heartwarming scenes around the world as people attempt to lift spirits.

In Switzerland, where cases nearly doubled to 2,200 on Sunday, Geneva residents applauded, whistled and rang bells from their balconies and windows to thank health workers on the frontline.

Images of Italians singing from their balconies have also gone viral and the choir of Stockholm's Katarina church decided to livestream their performances online.

They Sent 'Dante Crocodiles' To Our Area To Scarce Us — Ajum...
55 minutes ago