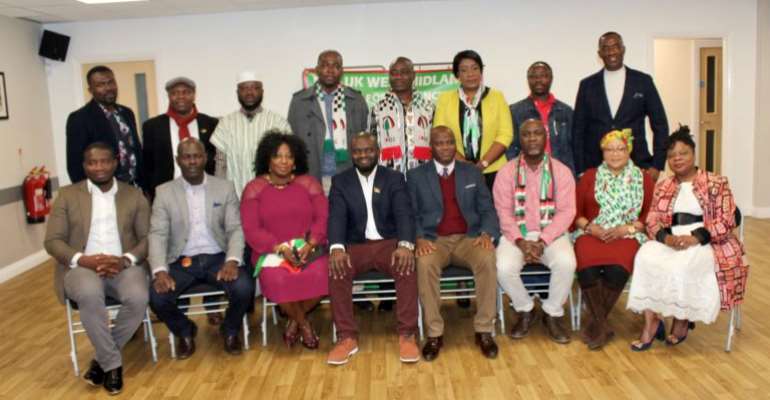 The UK/IR Chapter of the opposition National Democratic Congress (NDC) over the weekend inaugurated the West Midland (Telford) Branch on the 7th March 2020 at Oakengate, Telford, UK.

As part of the NDC’s preparation to recapture power, the party has started to open up more branches in the diaspora. The West Midland is one of the most densely populated areas where Ghanaian reside.

The party elected nine officers to spearhead its affairs in the West Midlands locality.

The NDC UK/IR Chapter chairman, Alhaji Alhassan Mbalba opined that although there was a ruling on the implementation of the people’s representation act, ROPAL, the Electoral Commission could struggle to bring ROPAL to the diaspora community before the election 2020.

On his part, the Milton Keynes Branch chairman, Mr Conrad Dumbah underscored the need for existing branches to support new branches to grow. He argued that the expansion of the branches was crucial for the party’s overall agenda of making the NDC attractive in the UK.

The special guest speaker of the occasion was the president of the Ghana Union Midlands, Dr Quaye Botchway. In his address, Dr Botchway said, “Grassroots in the political context, is about the use of people in a given district, region, or community as the basis for a political or economic movement. Grassroots movements and organizations use collective action from the local level to effect change at the local, regional, national, or international level”

“The ultimate source of your authority will reside with the people at the grassroots level, so don’t delude yourself into feeling protected by the organs of Government”, Dr Botchway advised.

In his acceptance speech, the chairman of the newly inaugurated branch, Mr Kenneth Johnson appealed, to members of the chapter to embrace variety and focus their minds on the elections. He argued that, with renewed mind and commitment, the NDC could win the elections with minimal efforts.

“Let us work hand in hand in order to return His Excellency John Dramani Mahama to the flagstaff house to rescue our country from the corruption, ineptitude, incompetence, nepotism, cronyism and laziness that has engulfed the NPP administration led by Nana Addo”, Mr Johnson emphasized.

The members of the inaugurated branch pledged their unwavering support for HE John Dramani Mahama. They hinted, they were giving it all to the general election and urged everyone to adopt more branches or constituencies.

The inducted officers are as follows;

There were many speakers at the function such as former chapter chairman, Mr Emmanuel Kofi Kwakye.

Mr Kwaakye recounted the formation of the branch and the many hurdles the executives and members had to endured. He wished the branch well and said he was optimistic the branch will grow from strength to strength.

There were representatives from other sister branches such as Birmingham Branch, South London Branch, East London Branch and the NDC Proforum UK.