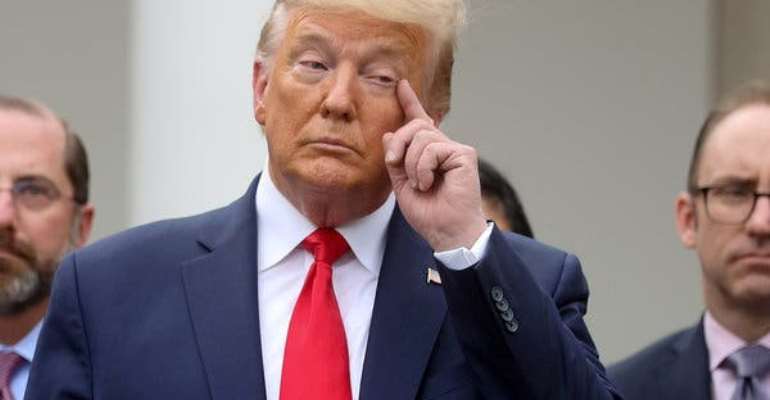 It is indeed cheering news that President Donald Trump of America declared a National Day of Prayer to fight Coronavirus outbreak. He asked the American citizens to pray wherever they are and to turn towards prayer in an act of faith. Listen to him, “We are a country that, throughout our history, has looked to God for protection and strength in times like these. Together, we will easily prevail!” Yes, this guy will always say that he wants America to be great again and I am happy that he is taking the right step to achieve this. When last did an American president talk or behave like this? Talking about national prayer? Reminding citizens of America’s history of divine protection and strength? Definitely, not recently. Look at his policies on Israel; a sharp deviation from the hostile posture of the past regime. Obama was doing everything to humiliate Israel, while economically and militarily empowering their enemies. I added militarily because those countries were using the huge money they were getting to secretly, deceptively further their military, terrorism and nuclear ambition. He was virtually pushing the Jews to the wall. And you know what that can result to.

But this is a country that was founded on biblical principles. It has God enshrined on its currency, motto, anthem and the president and officials take oath of office with the bible. In fact, almost all the founding fathers of America were spirit filled and even tongue-speaking Christians. But things later changed. The same God’s America became a leader in everything anti God, from the worship of Satan and immorality to total rebellion against God’s existence and authority. You already know that it hosts the headquarters of most occult groups, including Church of Satan. It is the biggest propagator of immoral activities like same-sex relationships, single motherhood, abortion, etc. They believe in total freedom’, even when the issue is against the word of God. In fact, it is not a secret that the government before Trump invested everything to lure and coerce other governments and institutions to legalize same-sex marriages. Thank God that some sane people, like African leaders rejected and rebuffed him. I remember the Nigerians, Ghanians and Kenyans told Obama to perish, go to hell with his promised aids and the immoral, demonic suggestion. It was indeed a big shame for the so-called God’s Own Country!

It is restoring and heartwarming that a president of America is today calling for a national prayer. It is a good restart and I believe that God is about to take that country to even greater heights. True, enduring prosperity, victory and security can only come from God; the creator and sustainer of all things. For the epidemic Coronavirus and other issues, solutions are already coming. The prayer is a good start. I remember when the Israelites were dying from snake bites in the wilderness, Moses prayed and God healed and stopped the problem. When the angel of death was killing the people because of the disobedience of taking census against God’s instructions, Great King David prayed and God recalled the angel. When three nations came against Judah, Jehoshaphat declared national praying and fasting and God went to war himself and their enemies killed themselves. When all the Jews were decreed to be killed, Esther asked Mordecai and all the Jews to fast and pray, and God miraculously turned the tables against their enemies. Haman, his sons and all their enemies were killed. And you remember the plagues in Egypt? Pharaoh would always ask Moses and Aaron to please go and pray to their God to remove the plagues. Yes, like in Egypt, all these diseases, viruses, natural disasters, attacks and wars are coming today because of our disobedience to God’s word. If we return to him as America is doing now, then he will remove them and restore us. But if not more serious problems, diseases and disasters are sure coming!

For Trump to recognize that America’s strength, prosperity, protection and healing come from God is indeed refreshing and should cause every citizen to celebrate. With his creation of jobs, foreign policies, pay rise for the military and security budgets, trade defense and actions against the enemies, Donald Trump is already writing his name in gold and may come out as one of the best presidents in the history of America. God bless you!

Rev Gabriel Agbo is of the Assemblies of God and the author of the book Power of Midnight Prayer. Tel: 08037113283. E-mail: [email protected] Website: www.authorsden.com/pastorgabrielnagbo