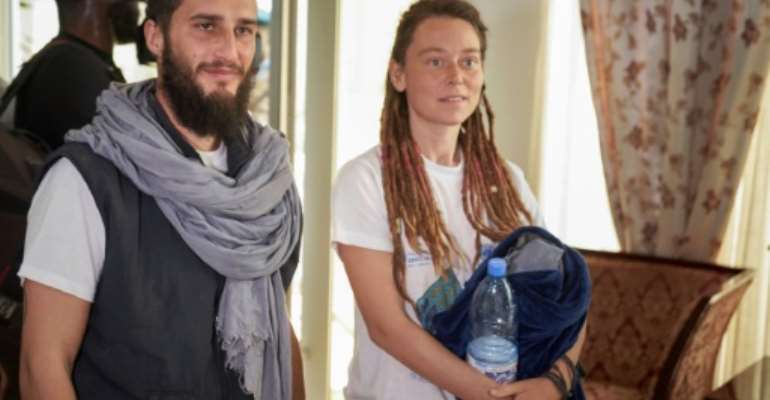 A Canadian woman and her Italian partner kidnapped in Burkina Faso in 2018 have been found in good health in the northwest of Mali after fleeing their captors and were set to be repatriated, diplomatic and UN sources said on Saturday.

Tedith Blais and Luca Tacchetto, both in their thirties, managed to escape near the northern city of Kidal on Friday and were taken to the local base of the UN mission in Mali, known by its French acronym MINUSMA.

The pair were then flown out on Saturday afternoon on a special plane to Mali's capital Bamako.

They appeared in good spirits but seemed taken aback when greeted by the Malian, UN and Canadian officials with extended elbows. The pair were then informed about the coronavirus crisis and the new social etiquette.

A MINUSMA picture showed Canadian Edith Blais and Italian partner Luca Tacchetto in Kidal, Mali, prior to their transfer to Bamako. By - (MINUSMA/AFP)

A health official sporting a mask and protective gear then took their temperature. The couple, who were wearing white T-shirts, did not speak to reporters.

They were then due to be taken to the presidential palace before being repatriated.

Malian Foreign Minister Tiebile Drame told AFP at the airport that no ransom had been paid.

"I can assure you that nothing was paid," he said.

"We have good news. Yesterday around three in the afternoon our Kidal staff informed me they had found two hostages -- a Canadian and an Italian," said Annadif.

"We have conducted medical tests. They are keeping really well and we let them rest," he said.

The pair were dressed like Tuaregs and apparently stopped a passing car and told the driver to take them to the nearest UN post. There was no detailed information on their escape or the identity of the kidnappers.

"From preliminary information they must have managed to escape. They were picked up by a civilian vehicle which drove them to the MINUSMA camp."

Blais, from Sherbrooke -- about 160 kilometres (100 miles) from Montreal -- and her partner Tacchetto, from Venice, disappeared in mid-December 2018 while travelling through the west African country.

The couple were driving by car to Ouagadougou from Bobo-Dioulasso, more than 360 kilometres west of the capital, when all trace of them was lost, according to Blais's family.

They had been planning to go to Togo to work on a humanitarian project.

In April 2019, a Burkina government spokesman said the two had been abducted and probably taken out of the country, but that they were not in any danger.

A Facebook page was dedicated to their disappearance. By FAMILY HANDOUT (FACEBOOK/AFP/File)

Burkina Faso, which had been a safe destination for years, has been wracked by jihadist violence since 2015 and several foreigners have been kidnapped.

An Australian and a Romanian national still remain missing.

It was not immediately clear how the couple were found in the vicinity of Kidal, about 1,500 kilometres northeast of Bamako which was under the control of Tuareg rebels who waged war against the Malian government from 2012 until 2015, when they signed a peace accord.

The violence has since spread from northern Mali to the centre of the country and spilled over to neighbouring states such as Burkina Faso and Niger.

But foreign minister Drame said their escape was the latest bit of "good news" in Mali.

"Bit by bit, despite the difficulties, this country is entering a phase of stabilisation with the backing of the international community."

Mali's neighbouring governments are often wary of former rebel groups, for example, suspecting them of cooperating with jihadists. They view Kidal as a rear base for Islamist militants.