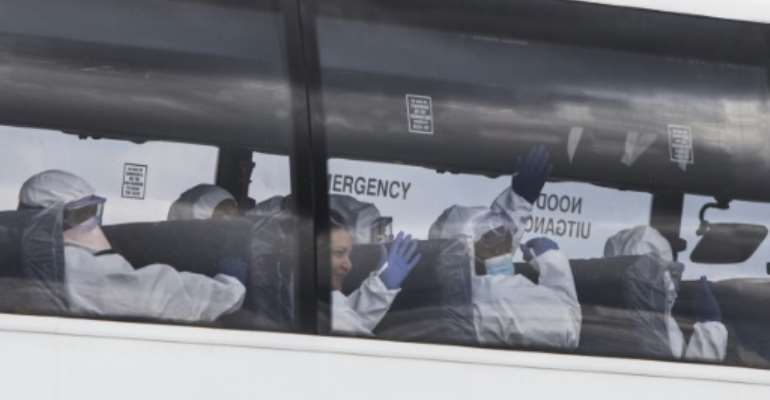 South African arrive at an airport in Limpop after flying from Wuhan, China, the epicentre of the coronavirus epidemic. By Guillem Sartorio (AFP)

South Africa repatriated dozens of its citizens from China on Saturday over the coronavirus, the health ministry said, the first such move by a sub-Saharan country.

The 114 South Africans were working and studying in Wuhan city, which was placed under lockdown for around two months after the novel coronavirus was first detected in December.

They landed at Polokwane International Airport in South Africa's northern Limpopo province, where they will be quarantined in a remote resort for a maximum of 21 days, authorities said.

President Cyril Ramaphosa ordered the repatriation late last month, after the anxious families of several South Africans in Wuhan asked the government to evacuate them.

The plane left South Africa late on Tuesday and flew to the Philippines, where it docked for a few days before flying to Wuhan on Friday.

The returnees were met by a team of health officials in white medical protective suits.

Wearing masks, they were swiftly loaded into coaches and driven 30 kilometres (18 miles) to the resort under police escort.

Government officials have assured that none of the group are infected by the virus and that the quarantine measures are only a precaution.

They will only be released after they get a clean bill of health.

The entire operation -- from screening the passengers, airlifting, quarantining -- has been led by the military.

"They are not sick, they have got no symptoms. All we are doing is bringing them home."

Limpopo residents have criticised the government for putting people's lives in danger. Many are concerned about the impact of hosting a quarantine site in an impoverished province.

The hashtag #LimpopoIsNotADumpingSite trended on Twitter before the aircraft's arrival.

"We are really stressed about the quarantine being here in Polokwane," said resident James Whitehead, 42, who will be attending a wedding next to the resort.

Mmaphuthi Mphahlele, 39, said the community had not been adequately informed about the quarantine.

"There was no awareness drive," he told AFP. "If they had I'm sure everybody would be... content and support this whole mission."

To date South Africa has found 24 cases of coronavirus infections -- the highest in sub-Saharan Africa followed by 21 in Senegal.

No deaths have been recorded so far, and there have not yet been any restrictions on travel or public gatherings.

The coronavirus pandemic has infected 143,000 people worldwide and killed more than 5,000, according to an AFP tally.

Sub-Saharan Africa remains largely unscathed, with less than 50 detected cases in 18 countries and only one death in Sudan.

The majority of people contracted the virus abroad, and there have been very few local transmissions in the region.

But the number of affected countries has multiplied over the past two days.

Kenya announced the first confirmed case in East Africa on Friday, and later that day eSwatini became the second country in southern Africa to announce a case.

Namibia on Saturday confirmed its first two cases and suspended all travel to and from Qatar, Ethiopia and Germany.