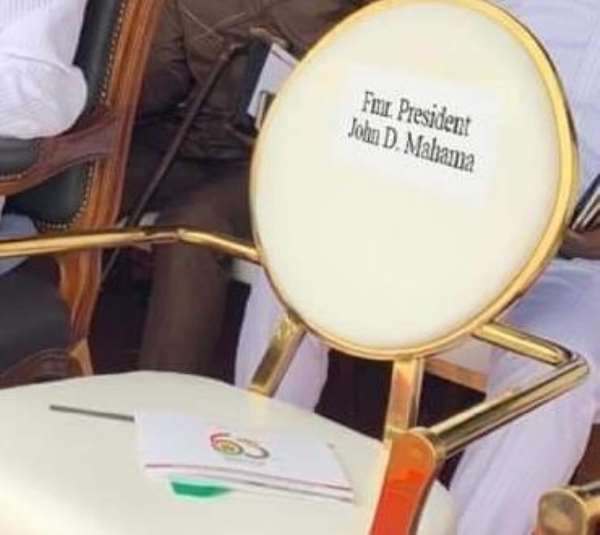 A former Director of Communications at the Presidency under the erstwhile John Mahama administration Stan Dogbe has intimated that the presence of former President John Dramani Mahama at functions where President Nana Akufo-Addo is attending is often irritating to the latter.

Stan Dogbe, a close working staff of the former President, wondered why members of the governing New Patriotic Party (NPP) appear to be showing inordinate interest in the absence of John Dramani Mahama from the 63rd Independence Anniversary parade in Kumasi on Friday.

The absence of the former President at the event sparked criticisms largely from members of the New Patriotic Party (NPP) who have accused him of not showing statesmanship.

It is not exactly clear what caused the failure of the former President from attending the function.

Photos of an empty seat labeled with the name John Dramani Mahama flooded social media amidst suggestions he deliberately refused to attend.

However, Mr. Stan Dogbe believes the talk about the absence of his boss is selective and mischievous.

“It is interesting how Brand #JohnMahama has completely overshadowed the 63rd Independence message of the President to the people of Ghana.

Or there was no message, judging from the zeal with which social media hounds of the government and some news outlets chose to focus on the publication of a supposed empty seat of the former president at the Kumasi event.

Some government workers including a media officer at the Presidency, Charles Nii Teiko Tagoe, and supporters of the ruling party have tagged me in their posts of the supposed empty chair. Truly, I am still trying to understand what their concern or interests are, because their boss, Nana Akufo-Addo, does not like the idea of #JohnMahama’s presence at events and Programmes he’s also at” Stan Dogbe wrote on Facebook.

He added “Fact states that President Mahama is not required to be at every event he is invited to. And the same applies to the President. That is why the VP Bawumia and other Ministers have and continue to represent him at various activities he’s invited too, and often after the invitations are accepted. Was the President at the annual 28 February Crossroads shooting incident and the Milo sponsored State Award for School Children? Are these indicative of him acting childishly and leaving these roles for the VP?

In Tamale last year, was former President John Agyekum Kufuor there, and is government suggesting that by his absence he did not act as a Statesman and therefore petty, knowing the seeming discontent among some of his loyalists within the system?

Was President Rawlings at the Friday event in Kumasi? And why was his chair not labeled supposedly and photographed and circulated?”

Though Mr. Stan Dogbe did not give reasons for the absence of the Presidential candidate of the National Democratic Congress at the Independence Day Celebration, he asserted that President Nana Akufo Addo abhors the presence of the former President at events both have to attend.

“Let us remember that while President Mahama had and still demonstrates a great sense of oneness and respect for all, and has demonstrated it wherever he is and with all including political opponents, same cannot be said of Mr. Akufo-Addo. He crowned his abhorrence of Mahama’s presence with him at events with his embarrassing outing in September 2019 during the Kofi Annan International Forum. So why would Mahama’s absence at Friday’s event be a matter of concern to him and his people?” he questioned

Meanwhile, there were intelligence reports that there was going to be an unwarranted, orchestrated hooting and disgrace of the former President to be instigated by the Chairman of the NPP in the Ashanti Region, Nana Kwame Antwi Boasiako aka Chairman Wontumi, who has not hidden his hatred for former President Mahama.