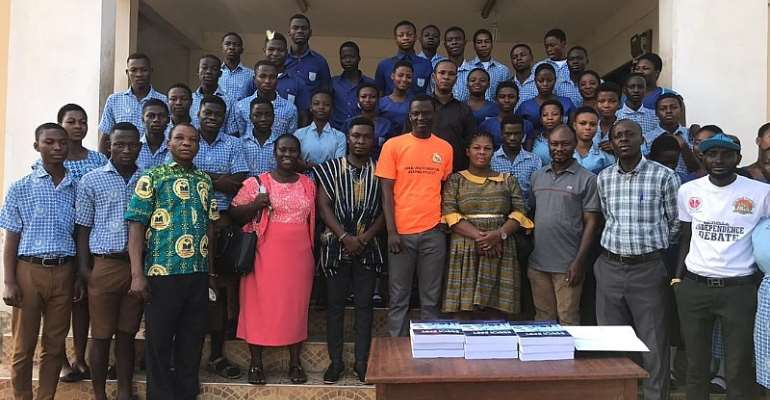 The donation is a follow-up to an earlier event on the 9th August 2019, when CEBSAR-AFRICA together with Rural Smile Foundation and CECIYAA Foundation made donation of five chemistry books to the Ejura community library.

The donation is part of CEBSAR-AFRICA’s project of giving back to deprived communities through education. Reports indicate that inadequate science elective textbooks for students learning is one of the major hurdles hindering effective teaching of science at the pre-tertiary level in the country. It is our hope that this initiative by CEBSAR-AFRICA will aid bridge this gap and ensure effective teaching and learning of science at our SHS in the country.

During the event, Mr. Isaac Owusu Afriyie, was warmly received by the school management, the headmistress of the school and her two deputies. “Textbooks help students understand in totality the subject matter, progression in each area of their education, and what they will become”, Mr. Owusu indicated in a speech.

“Sadly, some Senior High Schools in Ghana do not have enough textbooks to augment teachers’ efforts at teaching science. As an experienced Chemistry teacher, I know the impact of textbooks on students’ academic performance”, he continued in his speech.

The occasion was used to advice the students on the need and importance of making good use of materials and resources at their disposals and should desist from being addicted to social media at the expense of focusing on their studies. The students were encouraged, educated about the importance of textbooks, impacts and significance of textbooks on their academic achievements. Further, Mr. Owusu motivated the students using his own experiences in secondary school, where he relied solely on teachers’ notes because he had no money to buy textbooks.

"We strongly believe that such initiative by CEBSAR-AFRICA will abet reach out to especially more deprived students and schools who may be unable to purchase Chemistry textbooks and eventually put many smiles on the faces of poor students in the country," the NGO noted.

The management of Ejuraman Senior High School were very grateful to Isaac Owusu Afriyie, CEBSAR-AFRICA and Rural Smile Foundation for such initiative and help granted to the school.