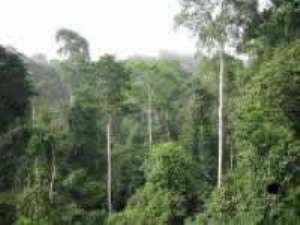 The Paramount Chief of Busunu Traditional Area has barred all hunting expeditions in Busunu and its surrounding communities.

A letter signed by the Busunuwura Monasa Jonokpowu II stated that the traditional area has from March 11 banned all communal hunting in the area as a result of adverse effects on the farming community.

The Busunwura noted that the worst hit by the activities of the hunters were women and children who lived in fear of being attacked and molested by the hunters.

"... impacting negatively on the people who are into crop farming in particular as well as affecting the peaceful coexistence of people in the traditional area" The letter indicated.

The traditional area also accused the hunters of killing animals and burning grooves considered as totems to the people. Practices they believed could spell doom for the people in the area.

Meanwhile, a resident said the rate at which the enthusiast hunters thronged the community to hunt was alarming and needed to be a curb.

Bugli Isaiah who was an eyewitness narrated that an articulator truck loaded with about sixty people with dogs and other tools came to Busunu on 11th March to hunt without prior notification of the authorities of the traditional area.

According to him, the unawareness did not augur well with the youth who tried to stop the hunters but the expedition team resisted but were arraigned before the Busuwura.

Bugli stressed that at the palace, the Busunuwura decreed that they left the premises which the hunters obliged.

He said subsequent consultations led the Busunuwura Monasa Jinakpowu II to make a pronouncement banning all hunting expeditions in the traditional area.

The eye witness said the chief felt bad to administer cases of bushfires and theft purported by these hunting groups in the perennial dry seasons and citing cases of high theft in areas like Dendilenpa, Kojokura, Wawato among others.

Asked where these people were believed to come from, he replied:

" They mostly speak Dagbanli but we do not know if they are Dagombas but they come from neighbouring communities".

The Busunuwura has however started distributing these letters to all communities around Busunu about his pronouncement.

The letter further urges all stakeholders to abide by the new law as anyone found culpable would face the consequences.