CHRAJ, Others Sign MoU To Fight Corruption And Crimes 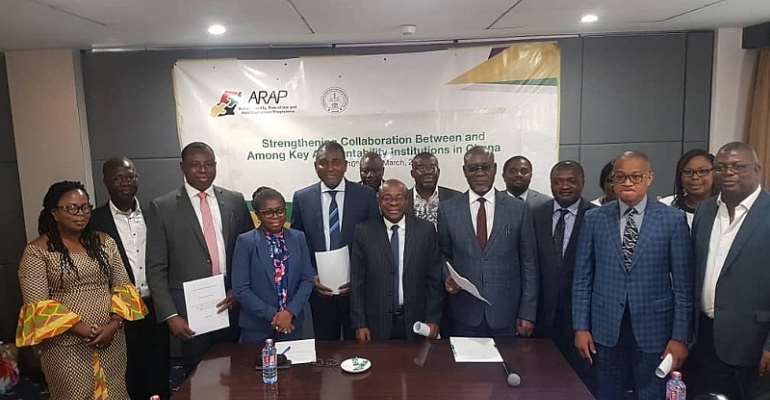 The Commission on Human Rights and Administrative Justice (CHRAJ) with support from the EU and ARAP, has signed a memorandum of understanding (MoU) with Key Accountability Institutions (KAIs) in Ghana.

The eleven (11) KAIs are: The Commission on Human Rights and Administrative Justice, Parliament of Ghana, Office of the Attorney-General and Ministry of Justice, the Economic and Organised Crime Office, the Ghana Audit Service, the Financial Intelligence Centre, the Narcotics Control Board, the Internal Audit Agency, the Bureau of National Investigation, Ghana police service, and the Office of the Special Prosecutor.

The MOU developed is to assist transparency and accountability and improve coordination and systems for the fight against corruption in the furtherance of the National Anti-Corruption Action Plan (NACAP).

The MOU also aimed at exchanging information; foster better understanding and cooperation among the KAIs; promote synergy and better coordination of activities among the KAIs; enhance the capacity of KAIs to address challenges of emerging methods of corruption and crime, and minimize the potential for mandate overlaps.

"These measures include the adoption of legislative and other measures to streamline the systems for managing and accounting for the effective and efficient use of Ghana’s limited resources, and for improved public service delivery".

"Notwithstanding the measures initiated, the Country continues to encounter significant challenges in addressing corruption in particular and fighting crime in general", he said.

He said, they have identified strong collaboration among Anti-Corruption Agencies as key to achieving Strategic Objective 4, which is “to Conduct Effective Investigations and Prosecution of Corrupt Conduct”.

collaboration among anti-corruption and key accountability institutions in the country", he noted.

Mr. Quayson stated that Protocols are to be developed under the MoU to enable the KAIs to: undertake specific activities including sharing information and experiences; organize periodic engagements for the public.

Mr. Joseph Whittal, CHRAJ Commissioner, said Ghanaians are beginning to be cynical and are expecting a lot from accountability institutions in the fight against corruption and crime.

He urged the institutions mandated under the law to put their synergies to work.

“We cannot fight it individually, hence the collaboration and the MOU marks the beginning of the coalition of all the energies of the key anti-corruption institutions agreeing to work together,” he said.

Mr. Whittal said the MoU should not be put down to gather dust but rather actualized and the institutions involved have no excuse to fail Ghanaians.

Commissioner of Police Frank Adu-Poku Rtd, Executive Director of Economic and Organized Crime Office (EOCO), said their institution was key so far as the fight against corruption was concerned but they could not do it alone and was committed to ensuring that the MOU would lead to effective action.

He said EOCO’s doors were opened to support the initiative to help fight against corruption and crime in the country.