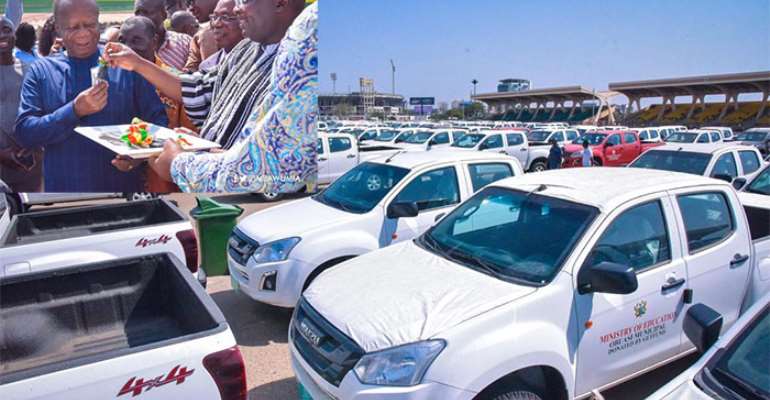 One of the missing habits in the management of state properties is maintenance culture.

Although so much pressure is exerted by heads of department for the replacement of broken down vehicles, this does not correspond to the necessary maintenance culture needed to ensure that state cars serve for as long as they are supposed to be.

Many of such vehicles do not serve for as long as the five-year lifespan of state vehicles.

State properties are still considered the possessions of Ghana, for which reason they need to be maintained properly.

We have been constrained to bring this subject to the front burner following the recent delivery of 858 vehicles to the Ghana Education Service (GES) by government. Earlier, the military and the police too were supplied critical vehicles to enhance their performance.

A lot of state funds go into the purchases of these vehicles; it, therefore, behoves the heads of such agencies to ensure their reckless use is stopped and the periodic maintenance regimen applied strictly.

One of the state transport companies not STC is said to have suffered a dwindling fleet of serviceable vehicles the reason for which the situation is not far-fetched. The agency was supplied with new vehicles a few years ago but some of these are in such bad state a few years after their commissioning that it is clear that they have not been properly maintained by their managers.

Under such circumstances, the managers of such fleets should be held accountable for the poor state of the vehicles.

The vehicles are poorly managed, regular changing of lubricants a necessity for vehicles as part of standard maintenance regimen does not exist in many state agencies. In some cases, the lubricants are rather sold to private persons since after all nobody ensures the right things are done.

In the rural areas, the situation is even worse yet when these vehicles start developing challenges after three years of service, managements are quick to include in their requests replacement of vehicles.

Besides the poor maintenance culture prevalent in state agencies, vehicles are used for non-official duties by both senior officers and even drivers assigned such vehicles.

The cost of the vehicles is staggering the opportunity cost of which is significant. The military must be commended for their exceptional maintenance culture; something which other agencies should emulate. The public purse must be protected through proper and prudent management of fleets of state agencies.

It is our demand that the vehicles delivered to the GES would constitute the nucleus, a new maintenance culture for state vehicles in the various agencies. We shall watch how things pan out.