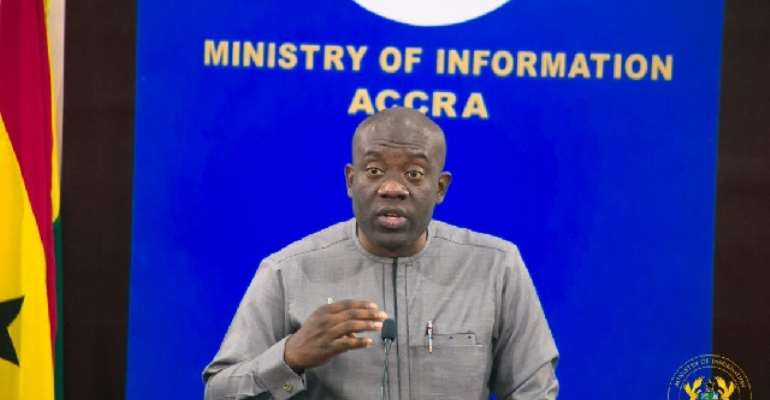 Ghanaians must neither joke with nor ascribe conspiracy theories to the near-coincidence between President Akufo-Addo’s national address on the coronavirus outbreak on Wednesday and the confirmation of two cases in Ghana the following day, Information Minister Kojo Oppong Nkrumah has warned.

The two cases confirmed in Ghana involve a Ghanaian male who flew into the country from Norway and a male foreign national from Turkey, Mr Oppong Nkrumah revealed in various radio interviews on Friday.

He would not, however, reveal the identities of the two patients.

The patients, he said, have been in the country for about a week.

Health Minister Dr Kweku Agyemang-Manu, who broke the news at an emergency press conference Thursday night, said the two patients have been quarantined and are stable.

When Accra-based Starr FM put it to him that there were speculations that the President and the government already knew the two cases had been confirmed as of the Wednesday he addressed the nation on the matter, Mr Oppong Nkrumah said: “That is absolutely false”.

“But let me caution: There’s a trend in this country; when serious matters come up, people are interested in politics and conspiracy theories and jokes on social media …

“This is not the time to joke or conspire about matters like this. We have to spend our airtime, our social media pages, sharing information on how to prevent contact so that we can save lives … not spend time tickling ourselves in conspiracy theories”, he suggested.

As of Thursday, 126, 380 coronavirus cases had been recorded across the globe, according to worldometer with 4, 635 deaths.

The disease first broke out in Wuhan, China but has spread through over 100 countries worldwide.

Just on Wednesday, President Nana Akufo-Addo told the nation that the ministry of finance, upon his orders, has alloted $100 million to the fight against the disease.