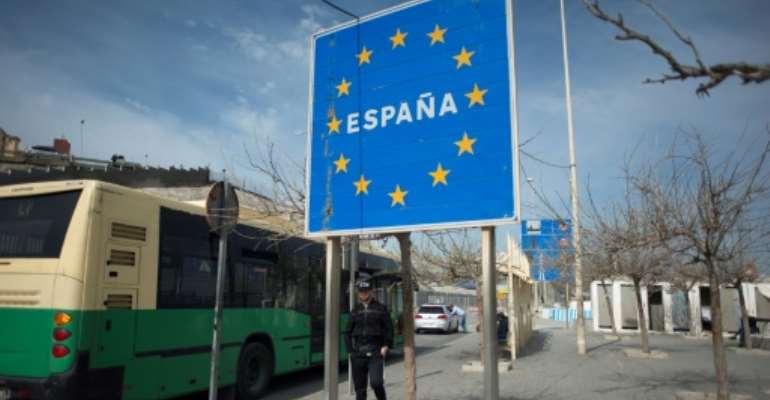 Spain's enclaves along the Moroccan coast are the only land borders between Africa and the European Union. By JORGE GUERRERO (AFP)

Morocco suspended air and sea links with France and Spain on Friday as well as closing land borders with two Spanish North African enclaves to prevent the spread of coronavirus, officials said.

Rabat's decision to close the frontiers around Ceuta and Melilla shuts the only land border between Africa and the European Union.

Morocco's decision to suspend passenger traffic with its two largest trading partners as well as flights with neighbouring Algeria was announced in statements carried by the official MAP agency.

Algeria's presidency said the decision to suspend air links between the two neighbours was "mutually agreed".

State airline Air Algeria has also reduced air links with France and suspended them with Spain.

Spain's foreign ministry said Morocco had "suspended flights to and from Spain and all passenger transport by boat", a move coordinated with Madrid.

Authorities in both enclaves issued a message late on Thursday urging all citizens currently located in Morocco to quickly return home.

"From 6:00 am (0500 GMT), the Beni Enzar border crossing will be closed so all citizens of Melilla who are currently in Morocco should return to the city as soon as possible," the Melillan authorities wrote on Twitter, describing it as a "preventative measure".

Borders with the two enclaves would be partially re-opened from Friday afternoon to allow stranded Spaniards to return, Spain's embassy in Rabat tweeted.

Morocco's merchant navy announced all the country's Atlantic and Mediterranean ports were "temporarily closed to all pleasure, cruise and passenger ships".

Only ships "exclusively transporting vehicles and their drivers" would remain authorised, it said.

Antonio Navarro, managing editor of the Madrid-based Atalayar, told AFP he had just managed to avoid being caught in the closures after travelling to Tangiers for work on Wednesday.

After hearing the borders were about to be shut, he rushed back to Ceuta during the night and was able to catch a pre-dawn ferry to the southern Spanish port of Algeciras.

But he said he would work from his parents' home in the southern city of Sevilla.

Spain is one of the worst-hit countries in Europe, with more than 4,200 cases, mostly in Madrid, and 120 dead.

Akufo-Addo, Ken Take Ghana Back To HIPC – Mahama
12 minutes ago