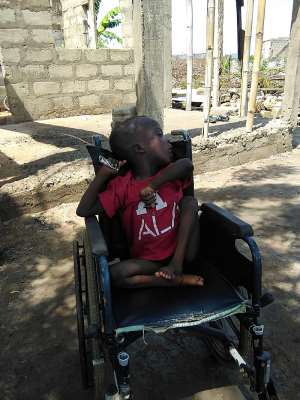 A mother whose seven-year-old son lives with a condition called Brain Arteriovenous Malformation (AVM) has expressed her strongest desire that she wish his son could go to school.

Brain Arteriovenous Malformation is a tangle of abnormal and poorly formed blood vessels. Brain AVMs are of special concern because of the damage they cause when they bleed. They are rare and occur in less than one per cent of the general population, according to the Toronto Brain Vascular malformation study group.

Ms Antoinette Sinzogah, Mother of seven year old Benjamin Dotu who lives with AVM, said Benjamin is her fourth child. Benjamin has a slightly bigger head, sits without support, talks eloquently, he is able to express himself and he is intelligent.

Ms Sinzogah told the Special Mothers Project, an advocacy and awareness creation programme on cerebral palsy and issues affecting families raising children with Special Needs, that she was a French teacher in a private school when she gave birth to Benjamin but had to stop working because of her son’s condition to become a stay-at-home mother and primary caregiver.

“I wish my son could go to school, I am even willing to work in any school that would admit my son so that I can help attend to children with special needs in the school. I trained as a professional teacher,” she said.

Ms Sinzogah said she had a seemingly normal pregnancy except that she had Malaria when she was four months into the pregnancy, and was induced into labour when she was due delivery.

“My son had jaundice in the first week of life but he was put under phototherapy to clear it, as he grew, I noticed his neck wasn’t getting stable, I complained to the healthcare professionals but they told me to give it sometime.

“When my son was six months old, I went back to the hospital where I was told to start physiotherapy, doctors said they could not operate him because of where the malformation is,” she said

Ms Sinzogah said her family is forced to live on one income, that is her husband’s income and it is woefully inadequate given that they have four children and her income as a teacher was of great help to the family.

She appealed to the government to establish facilities that accommodate and educate children with special needs and also to employ especially mothers to work in such facilities.

“I am ever ready to work in a special needs facility or school should my son have the opportunity to go to school,” Ms Sinzogah added.

Your Petition Is Opportunistic, Populist; We’re Already Prob...
10 hours ago