Domelevo’s Competence and Integrity Will Be Tested and Determined Soon 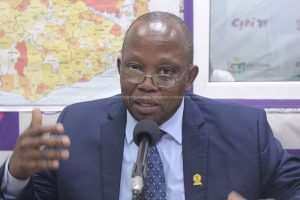 It comes just within days of Auditor-General Daniel Yaw Domelevo’s making the banner news headlines regarding the decision of the Auditor-General’s Department to bill the GETFund Office the quite considerable sum of GHȻ 350,000 for an auditing service reportedly requested by then GETFund’s newly appointed Administrator, Mr. Richard Boadu (See “Audit Service Grabs GHC 350,000 from GETFund” DailyGuideNetwork.com / Ghanaweb.com 3/10/20). That was as relatively far back as 2017, so, obviously, the auditing of the GETFund account books ought to have covered the four-year period between 2012 or 2013 and the end of either 2016 or the first-quarter of 2017, at about the same period that the newly elected Akufo-Addo-led government of the New Patriotic Party (NPP) assumed the reins of governance.

Interestingly, according to Mr. Boadu, that is, the GETFund Administrator, the Auditor-General also requested, in turn, that the fiscal years of 2017 and 2018 needed to be factored into the purview of the auditing period, if also to prevent the likelihood of operatives of the previous Mahama-led regime of the National Democratic Congress’ raising questions about witch-hunting. Now, while on the face of it, Mr. Domelevo’s request appeared to make perfect sense, nevertheless, in terms of official practice or protocol, such decision was rather odd. In all likelihood, it smacked of a mischievous attempt on the part of the Mahama-appointed Mr. Domelevo to offset any possibility of adverse findings, by way of fiscal mismanagement, being brought against GETFund administrators appointed by operatives of the previous Mahama regime. And this clearly appears to have been the outcome of the resulting Auditor-General’s Report churned out by Mr. Domelevo recently.

But, of course, what is rather scandalously curious, in the words of Mr. Boadu, the current GETFund Administrator, is the abject and deafening and, perhaps, even deliberate failure of the Auditor-General to present a copy of the Auditor’s Report to the official who had specifically requested the auditing of the account books of the GETfund establishment, for which services the Auditor-General had promptly requested the payment of GHȻ 350,000 and promptly received the same, according to Mr. Boadu. Ordinarily, GETFund ought not to have been charged the aforesaid amount as a government subsidiary making an urgent and necessary request to another taxpayer-underwritten establishment that was statutorily charged with routinely performing precisely the already-paid-for or salaried job of ensuring that operatives of public establishments like GETFund operated with the requisite fiscal accountability.

Equally acceptable, of course, at least on the face of it, was Mr. Domelevo’s alleged insistence that the advance payment of GHȻ 350,000 had become necessary because the funding needed for activities such as that which had been requested by GETFund’s Administrator, had been unduly delayed by the Ministry of Finance. By the foregoing explanation, it was reasonable to expect that sometime in the near or foreseeable future, the Auditor-General’s Department would refund the GHȻ 350,000 to GETFund, else this would be tantamount to what might be aptly termed as an interdepartmental theft of some sort. The foregoing aside, what is equally curious about this case is the alleged decision by the Auditor-General to rashly publish the requested Auditor’s Report in the various local and national newspapers and media portals, and even have the Auditor-General publicly discuss some of the contents of his report in the media well before the same had been, first and foremost, submitted to Parliament, the statutory and official oversight branch of the Government for study and the necessary recommendations and actions taken, as deemed to be appropriate.

If, indeed, it pans out that Mr. Domelevo has so flagrantly, egregiously and unprofessionally conducted himself, then, of course, there would be absolutely no other justifiable recourse than to have the President decide not to extend the tenure of Auditor-General Daniel Yaw Domelevo. You see, Dear Reader, not only did Mr. Domelevo flagrantly and egregiously violate his professional code of ethics or protocol, his apparent resort to what may be aptly termed as an anti-establishment political crusading is clearly out of whack and kilter with the kind of professionally staid and mature temperament required of any occupant of his job and very sensitive post. We shall also shortly take up the matter regarding the decision by a bipartisan ad-hoc committee in Parliament to have a specially appointed Auditor examine the ledgers of the Auditor-General’s Department. Our legitimately elected representatives well appear to be smelling a rat under the desk of Auditor-General Daniel Yaw Domelevo. Well, let’s keep our metaphorical fingers crossed and see just what happens.