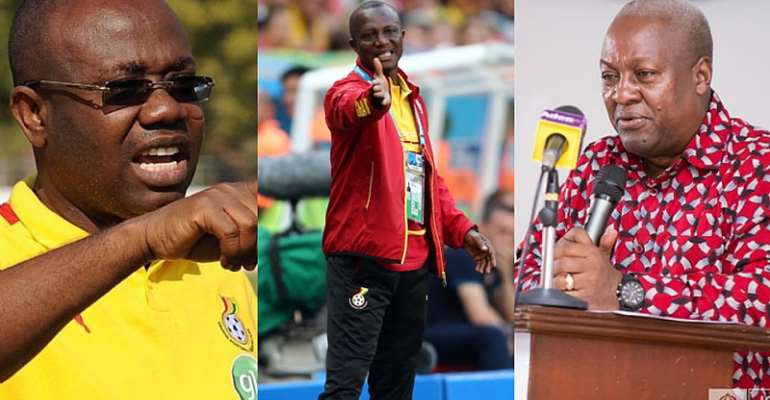 It may seem rather farfetched, but it is not altogether farfetched at all; not by any normal stretch of the human imagination. I am, of course, talking about the Anas Aremeyaw Anas-produced “Number 12” filmic documentary exposé on the Kwasi Nyantakyi tenure at the Ghana Football Association (GFA), and the great likelihood that when Mr. Nyantakyi was allegedly caught on videotape claiming that he could fob off a newly elected President Addo Dankwa Akufo-Addo and Vice-President Mahamudu Bawumia, the amount of money that the dismissed and disgraced GFA President claimed could readily seal the deal between the GFA and the Presidency, may very well have been the asking price of Nana Akufo-Addo’s immediate predecessor, to wit, former President John Dramani Mahama, the nationally and globally infamous payola-guzzling Ghanaian politician.

In other words, Mr. Nyantakyi may very well have arrived at this ballpark figure primarily based on some shady deals that may have been going on behind the scenes under the 8-year tenure of the Mills-Mahama regime, and not because there was any clear-cut evidence that Messrs. Akufo-Addo and Bawumia were facilely and scandalously positioned in any active participation in any such a scam. It was, in short, a grossly miscalculated presumption that since Mr. Mahama had cheaply been on the take while in office, it logically stood to reason that both Messrs. Akufo-Addo and Bawumia would be equally poised on the take because, after all, wasn’t this the firmly and perennially established normative Ghanaian political culture?

It was also almost certain, based on his very public assertion, that the man who testified to a British Broadcasting Corporation (BBC) television reporter that corruption had been the norm, rather than the exception, from the time of Adam and Eve or the Cradle of Humanity, that Nana Akufo-Addo was poised to being permanently dispatched from the epicenter of Ghanaian political culture. “Everybody needs to see this eye-opening documentary,” Mr. Sleepy-Eyes lustily salivated. Earlier on, in the wake of the narrow defeat of his former Attorney-General and Minister of Justice, the so-called Gentle Giant had dastardly and mischievously informed the global community that his own former Foreign Minister was a certified arsonist who may very well have set alight the taxpayer-underwritten private residence of former President Jerry John Rawlings, because absolutely not just about anybody, by sheer virtue of citizenship, could be voted President of the Sovereign Democratic Republic of Ghana.

The implication here being that the Giant-Dwarf of Akyem-Abuakwa may very well have lividly torched the Rawlingses’ Ridge-located residence as a means of teaching the Sogakope Mafia Generalissimo a lesson in not ever messing with the stature of the Akyem-Abomosu Boy. Anyway, to the predictably indelible shame of the Gentle Giant, the Anas-produced “Number 12” documentary did not expose anything that could even remotely be forensically credibly used to impugn the personal corruption-free professional track-record of the Giant-Dwarf of Akyem-Abuakwa. But, of course, the preceding incessant drawing of blanks does not absolutely in any way mean or imply that even at 80 years old, the Gentle Giant has permanently and effectively ceased forever trying. After all, it was not for nothing that our Asante-Juaben and Kumasi-Barekese forebears coined the phrase “Kum-Apem, Apem-Beba,” to wit, “Kill a thousand and a thousand would promptly replace the thousand vanquished.”

It is also quite conceivable that when, according to recently fired Black Stars’ Coach Kwasi Appiah, then President John Dramani Mahama prevailed on GFA’s Mr. Kwasi Nyantakyi to fire the former Asante Kotoko soccer star, it was definitely a vintage move from the National Democratic Congress’ playbook from the chapter titled “Effectively Demolishing the Asante Project.” The non-Fanti Akan Project, that is (See “Mahama Asked Nyantakyi to Sack Me to Exonerate Gov’t from World Cup Scandal – Kwasi Appiah” Ghanaweb.com 2/3/20).

The author has 5286 publications published on Modern Ghana.

Feature Article
Powered By Modern Ghana
God Has, Indeed, Saved Us from Mahama
On Pan-Africanist: My Reply to the Naysayers
We Prefer Akufo-Addo’s Wicked God to Mahama’s Inscrutable Divine Providence
GUTA Must Be Empowered to Compete
Galamsey Now Threatens Our Cocoa Industry!
Church Registration Tips
Incorporating Ginger, And Cinnamon Into Your Daily Diet Is A Smart Move
Legalizing And Regulating Okada Verses Armed Robbery: The Context Is Not The Same — Prof. John Gatsi
Nigeria: We Can’t Breathe
COVID-19 Updates Live Dashboard
TOP STORIES

Mahama Installed As Development Chief Of Apesika
41 minutes ago

New Voter Roll: EC Quickly Restored My Name After I Raised A...
41 minutes ago