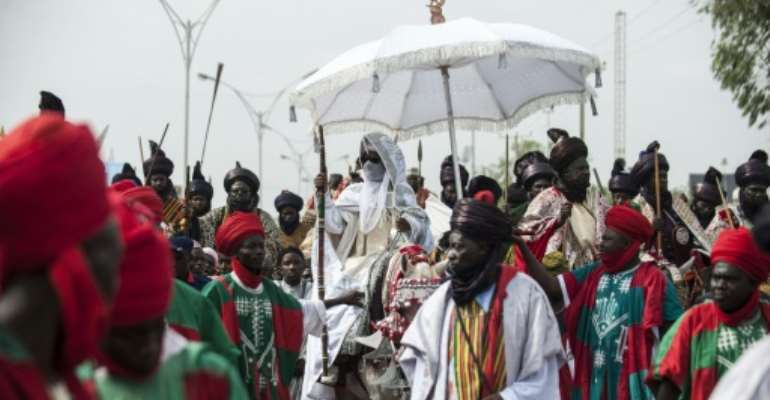 The Emir of Kano (C), Muhammadu Sanusi II, was deposed and banished this week. By STEFAN HEUNIS (AFP/File)

A Nigerian court on Friday ordered the release of a revered Islamic traditional ruler from detention after he was deposed and banished in a controversial practice dating back to colonial times.

Lamido Sanusi, the Emir of Kano, northern Nigeria's largest city, was abruptly removed from office on Monday by state governor Abdullahi Ganduje for "disrespect" and "insubordination".

Sanusi, 58, was banished under tight security to a small town in another state, in a tactic similar to that used by British imperial officials to punish rebellious leaders during the colonial period.

The move to hold him in exile sparked outcry from human rights activists and was challenged in court by Sanusi's lawyer.

At the hearing on Friday, Judge Anwuli Chikere of the federal high court in Abuja ordered that the deposed emir be released and allowed to move about freely.

"An interim order is hereby made releasing the applicant from the detention," she said.

The judge ordered the authorities to restore Sanusi's "rights to human dignity, personal liberty, freedom of association and movement in Nigeria, pending the hearing and determination of the applicant's originating summons".

The case was adjourned to March 26 for another hearing.

By tradition, the Kano emir is the second most senior Islamic ruler in Africa's most populous nation, after the sultan of Sokoto.

Emirs have no constitutional role in Nigeria, but they wield enormous influence over their subjects.

Sanusi, a former central bank chief who ascended the throne in 2014, has been an outspoken critic of political and religious leaders in his mainly-Muslim northern Nigeria, drawing flak of the authorities.

He had been at loggerheads with state governor Ganduje because of his criticism of the authorities and allegations he supported the opposition at elections last year.

The Kano State government named Alhaji Aminu Ado Bayero, the son of a former emir, as the new traditional ruler of Kano hours after dethroning Sanusi.