Life in quarantined Italy when even the churches are closed 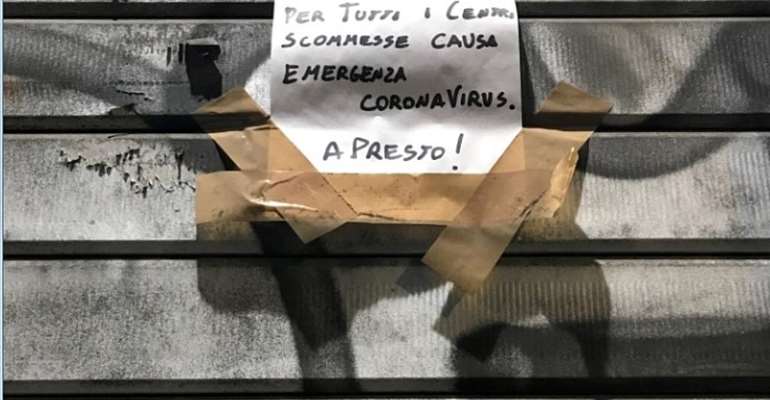 "Why are you outside?” It's not a question I ever thought I'd find myself asked by a police officer, uniformed and face-masked, next to the Colosseum – deserted despite Rome's spring sunshine.

Even a week ago it would have been inconceivable: just a week ago, when the number of people in Italy confirmed to have the new coronavirus was in the low thousands and the death toll had just passed 100.

Those numbers were alarming enough. Now the latest figures say 15,113 people have tested positive for the COVID-19 virus, of whom 1,016 have died. Nearly 13,000 people are actively infected, the most by far of any country in Europe.

The rise in cases, and the government's rapidly changing efforts to stop it, has narrowed the horizons of daily life in Italy.

No-go Italy
First a handful towns in the north were declared no-go zones, coronavirus 'hotspots' that outsiders shouldn't enter and residents couldn't leave. Schools and universities began to close, starting in the north and eventually nationwide.

By last weekend, Italy's economic capital Milan and the entire surrounding region of Lombardy was quarantined, along with Venice and other cities in the north.

Football matches were cancelled or played in empty stadiums. Museums, cinemas and theatres around the country were ordered shut, as well as some of the world's most-visited tourist attractions including the Colosseum, the Sistine Chapel and Pompeii.

As cases spread to all 20 Italian regions, the government decided it no longer made sense to talk about a coronavirus “red zone” in northern Italy; the entire country was a red zone.

On Monday people throughout Italy were told they should no longer leave their town of residence if they could help it. By Tuesday evening, it was our own houses we had to stay within: for the next three weeks, the orders are to stay indoors.

Which is how I found myself confronted by a policewoman for simply walking on the street.

Staying Indoors
Under the new rules, reasons to go outside have shrunk to the bare essentials: buying food; going to work, though only if you can't work remotely or take leave; attending doctors' appointments; walking the dog.

Police have the right to ask those out in public to justify their reasons for venturing out, including requiring a signed declaration that states your name, identification and purpose for being outside.

People found to have lied about their reasons can face fines worth hundreds of euros, or even time in prison (though you're more likely to be let go, as I was, with a simple warning to hurry home).

In a bid to limit the appeal of the outdoors, the government has ordered closed all 'non-essential' businesses: everything except supermarkets, pharmacies, banks, post offices, newsagents and a handful of other shops selling basic necessities.

Cafes and bars that had barely adjusted to the first draft of quarantine measures – laying down duct tape to ensure at least one metre's distance between customers at all times – are now shuttered altogether.

A few restaurants are open, but their doors remain closed; behind them, staff prepare meals to be handed to a flock of bicycle delivery riders ready to serve hundreds of people eating in.

The one-metre rule has become a kind of reflex, pedestrians swerving ostentatiously to avoid getting too close. Shoppers wait obediently – a metre apart – outside supermarkets, which are not allowed to admit more than a few customers at a time for fear they'll come into contact while filling their baskets.

Even Chruches are closed
As of Thursday, even Catholic churches – in Rome! – are closed.

The cost to Italy's crucial service and tourism industries will be brutal, but the government has decided the strain on health services of treating thousands of infected patients is a greater risk.

“Let's keep our distance today so we can embrace one another tomorrow,” Prime Minister Giuseppe Conte said in his address informing the nation it was about to be placed under restrictions unprecedented in peacetime.

As the coronavirus spreads, it's a calculation more and more governments will have to make. Italy is the first country in the world to declare a nationwide quarantine because of the COVID-19 virus, but it may not be the last.