Putting The Final Nail In The Coffin Of Ndc In The Yendi Constituency: The Propaganda Rhetoric Of Sammy Gyamfi 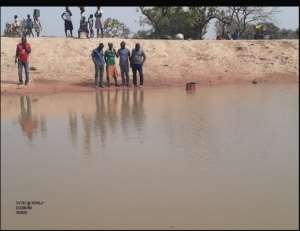 It has come to the attention of the NPP communications team, Yendi, a press conference organised at the 1V1D site at Nakpachie with the caption "EXPOSING THE DECEPTIVE FLAGSHIP PROMISES OF PRESIDENT AKUFO-ADDO: THE CASE OF DRIED-UP 1V1D PROJECTS IN NORTHERN GHANA".

Without any speck of doubt, the object of the conference was to hoodwink the innocent Ghanian into thinking that the Dams at Adibo and Napkachie, constructed under NPP government's flagship programme, dubbed, '1V1D', are dried up.

We wish to state unequivocally that the press conference was a clear manifestation of the incompetence of the NDC right from the National to the constituency level. At the first instance, one would have thought that, of a person of his calibre, Sammy Gyamfi would have checked all the facts surrounding those dams before jumping to, once again, prostituting the lies he knows best right before the media.

For the record, the dams at Nakpachie and Adibo still work in progress. Such dams have never harvested water before in the raining season. So how could those dams dry up suddenly, as he sought to mislead the people of Ghana?

What is mind boggling is that, the Yendi constituency NDC propaganda secretary, now communications officer, is from Adibo by birth, and while being aware of the fact that a side of the enbarnkenment was opend by members of the community for the fear that it might spillover to the old dam incase of a heavy downpour

Sad example of a bad journalism, Joy News' Kwesi Parker-Wilson appears to have personal interest in the wicked lies churned out by Mr Sammy Gyamfi.

Thus, it was not surprising that he failed to capture accurately the altercations between members of the community and the NDC team. This perhaps, pushed him into skewing the report by roping in NPP into the shameful disrespect and insensitivity towards the good people of Adibo, who are still mourning their late chief.

But we are not perturbed even a bit because the unattractive NDC is now doing most of the things, socially insulting and economically a waste of the huge sums of the monies they amassed from the poor Ghanaians, to just clinch on the straw again after loosing it by the massive defeat in 2016.

Specifically, they started doing all the negative tactics since H.E Nana-Addo brought closure to their only propaganda tool, the Abudu and Andani issue, especially in the North. It was of course, the NDC's best card, which they very well played for almost 2 decades.

One would have thought that, at least, in the NDC's worst circumstance of lack of message for the people of Napkachie, the NDC would have taken the opportunity at Nakpachie, to apologise to the good people of the community why the NDC hypocritically visited the community only for the bad intention, and particularly why the NDC never saw it necessary to provide a dam or other essential infrastructural and social intervention services for the good people of Nakpachie and Addibo throughout their most recent eight (8) years in power.

Thankfully, under the NPP, the good works of which the NDC are doing everything to discredit, the people of the above two communities can now boast of merchandised boreholes, a new market complex nearing completion at Adibo and one number three (3) unit classroom block at Nakpachie in less 3 years of the Nana-Addo Bawumia led government.

At least, the people of Adibo and Napkachie would have loved to hear what the NDC can do better to improve their livelihoods, moving forward, assuming that they would now begin to take the people of the North serious. Unfortunately, this was not the case, thus, confirming the fact that 'the alternative is absolutely empty'.

As bad as they have always been at how they communicate, it was not again surprising that during the conference the NDC could not mention just 1 dam they constructed in any part of the Yendi Municipality throughout their 8 waisted years, at least, for the discerning Ghanaians to compare and make their judgements. Instead, they kept shifting the goal post from not seeing the dams to dugouts and now dried dams. This is typical of an incompetent party with nothing to offer Ghanaians.