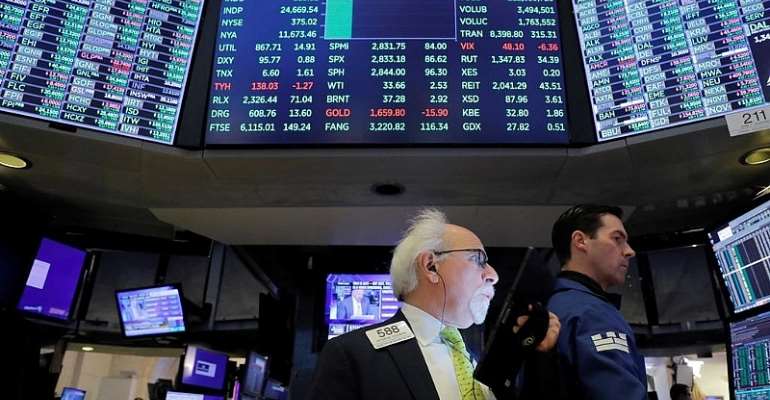 Stock markets have tumbled in Europe and across the globe and oil prices slumped as US President Donald Trump banned all travel from mainland Europe to America for a month to fight the coronavirus pandemic, ramping up fears of worldwide recession.

The stock markets carnage hit Europe, with losses accelerating in Paris and Frankfurt, which both fell more than 10 percent after the European Central Bank unveiled a series of measures to shore up the eurozone economy, but it did not lower interest rates like central banks elsewhere.

The ECB ramped up its super-cheap bank lending programme, vowing to "support bank lending to those affected most by the spread of the coronavirus, in particular small and medium-sized enterprises", as well as spend an additional 120 billion euros ($135 billion euros) this year buying up government and corporate bonds.

On Wall Street, the stocks resumed their slide lower. The Dow tumbled 7.4 percent in the first minute of trading, having fallen 5.9 percent on Wednesday.

Tokyo closed down 4.4 percent, putting it in a bear market after slumping more than 20 percent from a recent high.

"Taking the view that the president's travel ban has only further heightened the likelihood of a global recession... investors fled," said Connor Campbell, market analyst at Spreadex trading group.

Massive negative signal
"Travel restrictions equal slower global economic activity, so if you need any more coaxing to sell... after a massively negative signal from trading in US markets it just fell in your lap," said AxiCorp's Stephen Innes.

The coronavirus outbreak has left virtually no sector untouched, though travel and tourism have been particularly hard-hit as countries institute travel bans and quarantine requirements, with Italy in a country-wide lockdown.

The coronavirus market crash has wiped off $11.3 trillion from global valuations as of the end of Wednesday, according to Howard Silverblatt, a senior analyst at S&P Dow Jones Indices.

The number of coronavirus cases across the globe has risen to more than 126,000 with 4,600 deaths, according to Johns Hopkins University.

"We are now staring at the whole world going into a lockdown," Vandana Hari, of Vanda Insights, said. "Oil demand can be expected to crash through the floor and all previous projections on oil consumption are now out the door."

The oil market was already under pressure after Saudi Arabia and Gulf partner UAE stepped up a price war on Wednesday by unveiling plans to flood global markets.

The Saudi move was the latest escalation of a fight among oil producers after Russia balked at an OPEC-backed plan to cut production in response to lost demand because of the coronavirus.

Europe
Powered By Modern Ghana
Death toll in Nigeria jihadist attack rises to 30
Halep celebrates birthday with win under the centre court roof at French Open
Sinner sails under the roof as Azarenka rails in the rain at French Open
Public in France in favour of new lockdown as trust in government dips
Last orders in French southern city of Marseille as bars to close to stop Covid spread
Lesotho: Soldiers arrested for murder of controversial Chinese doctor
France beefs up security for Jewish holiday in wake of Paris knife attack
France could be 'overwhelmed' by second Covid-19 wave
Paris to unveil first public statue to a black woman who challenged slavery
COVID-19 Updates Live Dashboard
TOP STORIES