What Lesotho's constitution says about immunity for a sitting prime minister

By Hoolo 'Nyane - The Conversation 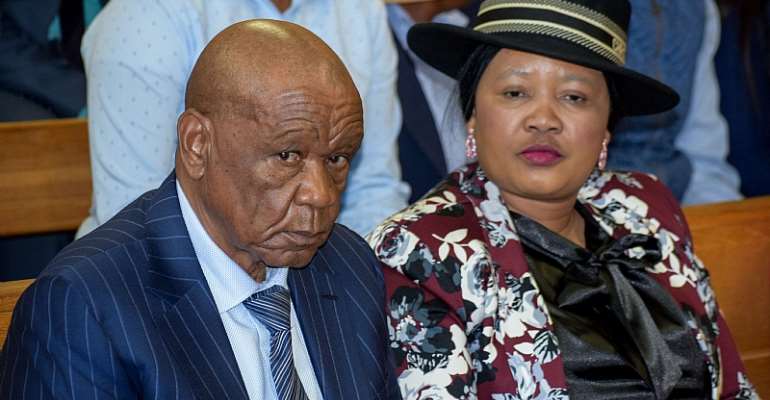 The constitution of Lesotho has come under international scrutiny over an unusual question: does it give the prime minister immunity from prosecution?

Previously, constitutional questions that attracted attention in relation to the tiny kingdom landlocked by South Africa orbited around elections , the appointment and dismissal of security chiefs and the dissolution of government.

The question of immunity has arisen against an intriguing backdrop. In January, Lesotho police announced that they had concluded investigations into the murder of Lipolelo Thabane (58), the estranged wife of Prime Minister Tom Thabane (89). She was shot dead in 2017 , two days before his inauguration as prime minister. He was, at the time, involved in a relationship with the woman who he was later to marry.

In February his new wife, Maessaiah Thabane (42), was charged with the murder of Lipolelo Thabane. Then, in a surprising turn of events, Thabane was later also charged for the murder.

The expectation was that when he appeared at the Maseru Magistrate Court he would be charged after which he would have his say on the validity or otherwise of the charge.

But this didn't happen.

Instead, his lawyer argued that Thabane could not be prosecuted because, under the country's constitution, he enjoyed legal immunity as a sitting prime minister. He argued that the issue be referred to the High Court to decide on the immunity issue. In terms of the country's constitution (Section 128(1)), this issue can only be settled by the High Court.

One of the key principles of liberal constitutionalism is that of equality in general, and equality before the law in particular. This is reflected in Section 19 of the kingdom's constitution. Furthermore, Lesotho's constitution provides for equality in several other sections such as sections 12, 18 and 26.

In its broadest sense, equality before the law subjects all people to the law, regardless of status. But, as a relic of the Westminster constitutional design , Lesotho's constitution still retains the antiquated doctrine of monarchical immunity. It posits that the King, or any person exercising the powers of his office, will be immune from criminal prosecution for any acts done by him in a private or official capacity .

But there is no provision in the constitution that extends legal immunity to the prime minister or any other person. This is the case despite the fact that most of the old monarchical prerogatives – like the dissolution and prorogation of parliament – have effectively shifted to the prime minister.

Therefore it is apparent that in terms of the constitution, only the King enjoys legal immunity.

One of the enduring legacies of British colonialism in Africa is that when the newly-independent countries drafted their new constitutions, most of them retained the antiquated notion that

the King can do no wrong .

This notion has been enshrined in many African constitutions.

In the decades since countries became independent, a number of African countries have extended this right to protect presidents , as heads of states and governments, against legal suits, albeit in varying degrees.

The modern justification for legal immunity for heads of government is that it is undesirable for a head of state to be hauled before the courts, while he is supposed to focus on matters of public interest.

The proponents of this view also contend that it borders on offending the principle of separation of powers when the judiciary is seen to be “tossing” the head of another equal branch of government before the courts of law.

These justifications for immunity notwithstanding, the emerging wave of scholarship in Africa is that legal immunity for heads of government is an affront to everything that modern constitutionalism stands for.

These include accountability, rule of law, equality, respect for human rights, constitutionality and even separation of powers.

Looking to the future

It remains to be seen whether Lesotho's High Court – sitting as the Constitutional Court – will uphold the prime minister's immunity argument.

What is palpably clear, though, is that in terms of Lesotho's constitution the legal immunity enjoyed by the King does not extend to the prime minister.

If the court decides to uphold his claim, it will be for reasons other than the express provisions of the constitution.

Hoolo 'Nyane does not work for, consult, own shares in or receive funding from any company or organization that would benefit from this article, and has disclosed no relevant affiliations beyond their academic appointment.

Article
Powered By Modern Ghana
FREE SHS: Akufo-Addo’s Populist Slant Versus Mahama’s Transformational Approach
Beyond 2020 — What Mahama’s Reviewed Free SHS Will Be Like
South Africans aren't being protected from fake sanitisers: what needs to be done
How COVID-19 changed community engagement in South Africa's low income areas
What South Africans must do to avoid a resurgence of COVID-19 infections
Why #ENDSARS protests are different, and what lessons they hold for Nigeria
King Kwasi Kyei-Darkwah Writes about IMANI
‘I Started 'Progressively Free SHS', I'll Make Current System Better’ – Mahama
Glory In A Mess Sanitation: Who To Call?
COVID-19 Updates Live Dashboard
TOP STORIES