...Stupid Boy Who Doesn't Know The Difference Between Ladies And Men Shoes
By Ananpansah B Abraham 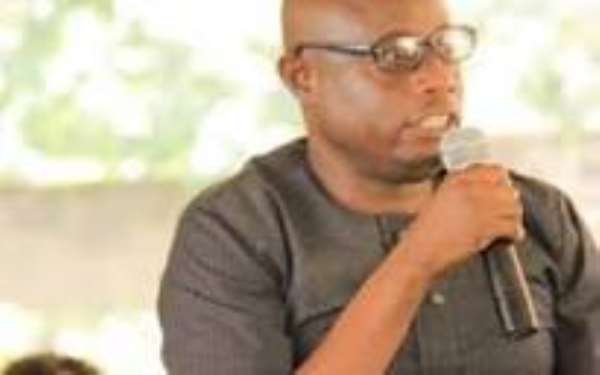 The Municipal Chief Executive for West Gonja Municipal Assembly, Hon.Saeed Muhazu Jibreal says he will personally deal with the opposition NDC Communications Officer for Damongo Constituency when they exit office in 2021.

In what appears to be comedy of errors, the Communications Officer, Mr. Mumuni Yahaya incurred the wrath of the president's representative when he described the latter's conduct at the just ended 63rd Independence Day Celebration as undiplomatic and graceless.

"I am repeating this, when we leave office in 2021 and they see me in that park, they should beat me up. I am repeating this, I will deal with Kiyoyo (Communications Officer) personally at the GES level, not politics... I don't blame him. He is a stooge. A stupid person leading our school children...Stupid fool. Thank you, " the enraged MCE said.

The MCE is reported to have angrily instructed the Disk Jockey to shut down and seize the microphone from the incumbent MP, Hon. Adam Mutawakilu, whilst the legislator was presenting awards he instituted to deserving 2018/2019 BECE candidates at the Regional Parade held in Damongo, the Savannah Regional Capital.

The MCE in justifying his action said the MP was not qualified and had no locus per protocol to speak at the ceremony.

The controversy which nearly sparked unrest brought the celebration to an abrupt end with disappointed students going home for the first time, since time immemorial without knowing which school emerged first, second and third in the march past.

In his usual paid for Sunday program aired between 8:00pm and 10:00pm on Damongo based PAD FM however, the NDC spokesman simply described the action of the MCE as undiplomatic and shameful, adding that, he should be mindful he will soon leave office very soon.

The incensed MCE called in the radio station minutes after the Communications Officer had finished with his program and described the latter as a "stooge, a stupid fool and an unintelligent person who goes about wearing old ladies shoes" among other unprintable words.

He added that he was going to deal personally with him from his professional lenses as a senior officer in the teaching filed when he leaves political office.

"I want to let Kiyoyo (Communication Officer) know that I'm far intelligent than him...I can sit him down and teach him because I'm senior over him in the teaching field. How can I be an MCE and think that I will be there forever? I'm not stupid as he is! I want to tell him, I will not use politics to victimize him, but he should get ready for me. I will leave the office. Just like he said I will leave office; I will surely leave office and become a teacher. I will become his senior officer and that is where I will teach him a lesson that it doesn't pay to insult senior people," the MCE fumed.

The MCE continued, "I am going to go into the gutters with that stupid boy who doesn't know the difference between ladies' shoes and men shoes. He wears ladies shoes...I am going to go into the gutters with this guy and I will deal with him personally. Kiyoko doesn't know the one he is dealing with.I'm more arrogant than anyone else in this world...When we were in opposition, they can enquire from my people whether I've ever stepped foot in their Independence Day Celebration, because I won't go and listen to stupid people who cannot even read. They can't read...".

The Member of Parliament earlier on stated that he duly sought permission from the Regional Minister to do his presentation after he noticed that aspect was not captured on the program.

He indicated he has been presenting this award to deserving students for the past three years and that the MCE, should've consulted the Regional Minister before his action.

The Regional Minister, Hon. Adam Salifu Braimah in an interview on PAD FM's Political Program, Aboyagbon admonished all parties to exercise restrain, since as a growing and learning region; some of those things are expected to happen mistakenly.

He said as a colleague legislator, he could not have denied the Damongo MP an opportunity to do his presentations atleast for once.