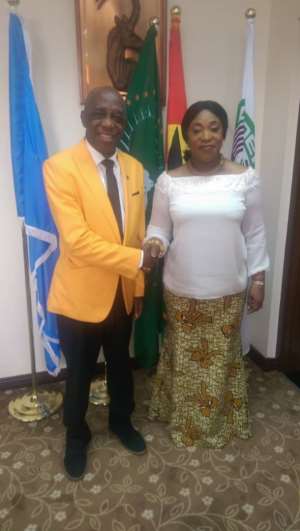 Fiber Optics inventor and innovator; Dr. Thomas Owusu Mensah met recently with the Foreign Minister; Ms Shirley Ayorkor Botchway at the Foreign Ministry to discuss how to bring Foreign Investments to Ghana to support the Signature projects of the President His Excellency Nana Dankwa Akuffo Addo.

The Minister recently was in Saudi Arabia where she met with Saudi Investors including; Prince Al Waleed, a major investor in high tech companies like Facebook, Twitter, Google in Silicon Valley. The Prince already supports projects in Ghana including; Otumfuo’s Education Fund.

Dr Thomas Mensah has brought $ 2.4 Billion Dollars from Overseas to support his major projects in Ghana like; Kumasi Airport and Maintenance Facility which he is developing with Otumfuo Osei Tutu II, as well as High-Speed Rail projects that he is working with the Railway Ministry

Foreign Direct Investment is critical to developing infrastructure and other sustainable projects in Ghana to grow the Economy.

Dr Thomas Mensah extended an invitation to the Minister for his book launch at the Manhyia Palace. The Foreword of the Book was written and signed by Otumfuo Osei Tutu II. Proceeds of the book Lunch will go to Silicon Valley of Ghana and Otumfuo’s Education Fund.

A High Tech drone will bring the book housed in an Akan Stool from the sky to land in Manhyia during the Launch.

Former Presidents; His Excellencies; Jerry Rawlings and John Kuffuor who are featured in the book as well as the current President; His Excellency; Nana Akufo-Addo have been invited to the book launch.

Dr Thomas Mensah is and the Founder and CEO of Silicon Valley of Ghana located at the Kofi Annan ICT Center in Accra Ghana.