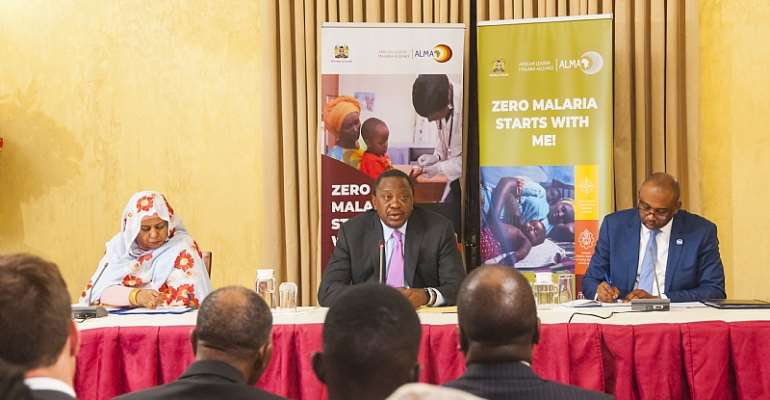 From left, Her Excellency Mrs. Amira El-Fadil, Commissioner for Social Affairs for the African Union Commission, His Excellency President Uhuru Kenyatta, President of the Republic of Kenya and Chair of the African Leaders Malaria Alliance (ALMA) and Dr. Abdourahmane Diallo, CEO of the RBM Partnership to End Malaria

His Excellency President Uhuru Kenyatta, recently appointed Chair of the African Leaders Malaria Alliance (ALMA), has announced his four priorities for his two-year term with the aim to eliminate malaria from the continent by 2030.

The game-changing agenda addresses major challenges in the battle against malaria. These challenges include the insufficient engagement of women, children and youth, a lack of funding from the domestic, public and private sectors, as well as the threat of donor funding stagnating.

At a press conference, His Excellency President Uhuru Kenyatta declared: “Although significant progress has been made in the battle against malaria over the past ten years, in order to realize the Africa We Want as outlined in Agenda 2063, we must avoid complacency and secure additional resources to defeat malaria and save lives." We have therefore defined four ambitious areas of action that set the agenda for my term as ALMA Chair:

1. Digitization and real time data
The creation of a digital platform to provide real time access to malaria-related data at country level will enhance malaria prevention and elimination efforts. Better access to data will facilitate strategic decision-making and target resources to drive down malaria cases and deaths. This innovation will promote and leverage the existing R&D and technology sector on the African continent. This will also enhance the sharing and expanded access to the Country Malaria Scorecards for Accountability & Action, allowing all citizens in all spheres of life and at all levels to be aware of their malaria situation and empowered to act.

Work with Africa’s Regional Economic Communities to engage Heads of State and Government to address key challenges and provide solutions in the fight against malaria. This includes the use of innovative technology to introduce regional scorecards for review and action by Heads of State and Government and to share lessons learned and best practices and create Awards for Excellence to recognize good performance at regional level.

4. Youth Advisory Group
Create a ‘Malaria Youth Army’, working with existing youth leaders across the African continent to champion youth engagement and resource commitments for malaria elimination. The ‘Malaria Youth Army’ will promote innovation, research and development and create a cadre of malaria advocates and champions.

“His Excellency President Kenyatta’s priorities for ALMA gained the immediate support of the African Union. We know that achieving these four priority areas will accelerate progress towards a malaria-free Africa,” commented Her Excellency Mrs. Amira El-Fadil, Commissioner for Social Affairs for the African Union Commission.

“Leadership by African Heads of State and Government who keep malaria elimination on top of the political agenda is integral to ending malaria within a generation. I believe that President Kenyatta’s four priorities, driven by innovation and greater engagement of all stakeholders is the right approach. It also ensures that new resources are available, and more communities are included in the growing zero malaria movement,” said Dr. Abdourahmane Diallo, CEO of the RBM Partnership to End Malaria.