'Our wounds will never heal': Ethiopia marks one year since plane crash 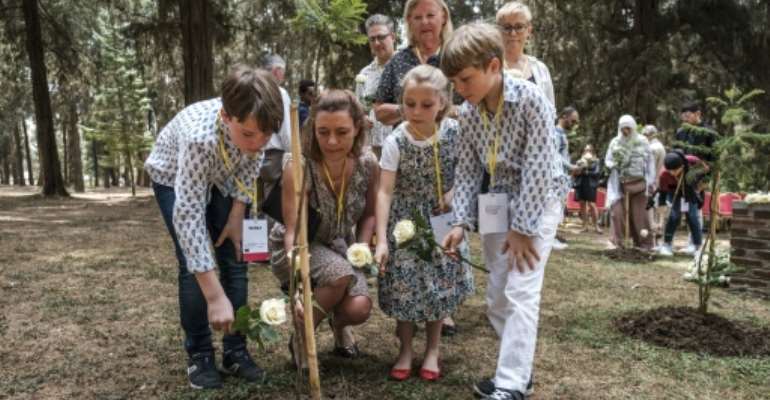 Relatives of French victims of the Flight 302 crash held a ceremony at the embassy in Addis Ababa. By EDUARDO SOTERAS (AFP)

Ethiopian Airlines on Tuesday marked the one-year anniversary of the crash of Flight 302, bringing together victims' families for a ceremony and six minutes of silence in memory of the time the jet took to go down.

Relatives gathered southeast of the capital, Addis Ababa, at the site where the Nairobi-bound Boeing 737 MAX crashed after takeoff on March 10, 2019, killing all 157 people on board and triggering the global grounding of the MAX jets.

Ethiopian pilots also paid tribute to their lost colleagues while UN officials in Addis Ababa held a candle-lit ceremony to remember agency staff among the victims who came from more than 30 countries.

"As friends and family gather in Ethiopia from all over the world to honor the memories of their loved ones, I pay tribute to the victims of this accident and wish their families continued strength," Ethiopian Prime Minister Abiy Ahmed said Tuesday on Twitter.

Security forces blocked journalists from attending the ceremony at the crash site, though vehicles transporting families could be seen heading there. By Michael Tewelde (AFP)

Security forces blocked journalists from attending the ceremony at the site, though vehicles transporting families could be seen heading there.

Some families have made multiple trips to the site in the past year, including in the immediate aftermath of the crash and when victims' remains were sent to their home countries towards the end of 2019.

But for Frenchwoman Catherine Berthet, who lost her 28-year-old daughter Camille, this week marked the first time she had set foot in Ethiopia since the disaster.

She decided to attend the ceremony at the urging of her therapist in hopes it would provide some form of closure, she told AFP.

"If you lose your child in a car accident, you can often see the body, and that's important. I won't have this chance because my daughter died in a plane crash -- her body was turned into a million pieces," Berthet said.

Graphic on the Ethiopian Airlines crash on March 10, 2019.. By Laurence CHU (AFP)

"So it's important to go to the country where she passed her final moments."

Virginie Fricaudet, president of an association of French victims' families, said she expected Tuesday's ceremony would help "close a chapter", though she acknowledged that relatives of the dead were still grieving.

"For me this commemoration is about bringing together this immense family that is connected by the tragedy," said Fricaudet, whose brother died on Flight 302.

On Monday, the families of Flight 302's nine French victims attended a memorial service at the French embassy in Addis Ababa, setting white roses at the base of nine jacaranda trees planted on the embassy grounds a year ago.

As recently as January, Ethiopian Airlines hoped to use the anniversary to announce the winner of an architectural design competition for a memorial, though the plan drew pushback from some victims' families who objected to what they perceived as a rushed timeline.

In the end, no memorial plans were revealed on Tuesday, according to Zekarias Asfaw, who attended the ceremony to honour his brother, who died in the crash.

After the victims' names were read aloud, attendees observed six minutes of silence -- the amount of time it took Flight 302 to go down, Zekarias said.

"It was a mix of a sober and emotional session where people some were crying, some were reflecting. It's just a mix of everything -- sad moments, joyous moments, celebration and all that," he said.

Memorial ceremonies have been taking place at the crash site of the Ethiopian Airlines flight 302 before the anniversary. By EDUARDO SOTERAS (AFP)

Back in Addis Ababa, the United Nations Economic Commission for Africa held a candle-lighting ceremony for the 21 UN personnel who died on Flight 302.

The Airline Pilots' Association of Ethiopia organised a separate ceremony next to the football pitch it has renamed after the flight's captain, Yared Getachew.

Addressing the mourners, Yared's father, Getachew Tessema, recalled how his son was "very happy" to join Ethiopian Airlines and how his position filled the family with "joy and pride".

"Yared was a hardworking man who was loved by many. He died and the only hope I have is to see him in the afterlife," Getachew said.

"Our wounds will never heal but we have nothing else to do."