By Emmanuel Anule with Max Delany in Lagos 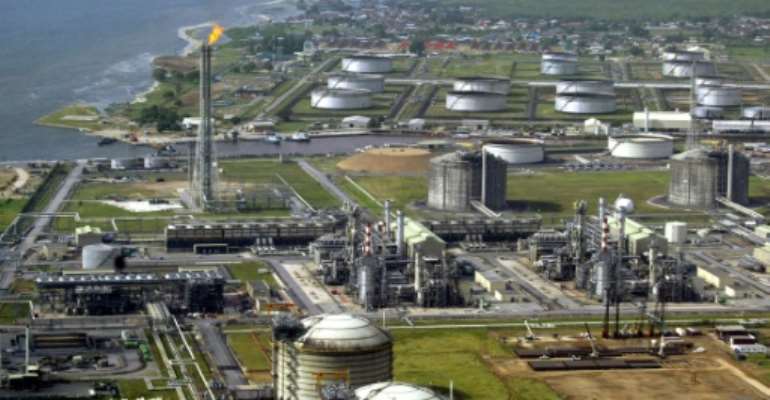 The price of oil is important for Nigeria's economy as exports account for a large part of the government's revenue and nearly all of the country's foreign exchange earnings. By PIUS UTOMI EKPEI (AFP/File)

Nigeria has reported only two confirmed coronavirus cases, but there are fears the fallout from the global outbreak could debilitate Africa's biggest economy.

The finance minister in the continent's largest oil producer said on Monday the government would scale back its budget after crude prices plunged far below the level it had envisioned.

"It is very clear that we will have to revisit crude oil benchmark price that we have of $57," Zainab Ahmed said after a hastily convened meeting with President Muhammadu Buhari.

"There will be reduced revenue in the budget and it will mean cutting the size of the budget."

Where the savings will come from in the record $34.6 billion spending plan agreed for this year remains to be seen.

A committee including Ahmed is set to report back to Buhari with a way forward in the coming days -- but room for manoeuvre may be limited.

Before the latest collapse in oil prices, Nigeria was aready struggling to boost growth after emerging in 2017 from its worst recession in decades caused by the last major crude slump.

Pledges by the authorities in Africa's most populous nation -- which relies on oil for some 90 percent of its foreign exchange -- to diversify the economy have failed to break the reliance on crude quickly enough.

Last month saw the International Monetary Fund lower its 2020 growth forecast for Nigeria to 2 percent on the back of lower oil prices.

"Nigeria has not learnt some lessons from its past in terms of diversifying its revenue base," said Ayodeji Ebo, managing director at Afrinvest Securities in Lagos.

Afrinvest on Monday estimated that the fall in the oil price would cause a revenue shortfall of over 55 percent.

Nigeria is watching nervously in the hope that leading oil producers Saudi Arabia and Russia quickly make up and return to the negotiating table to agree a deal to prop up prices.

Oil minister Timipre Sylva said the country believed they will sit down together again "when all of us would have begun to see effect of the reduction of prices".

For now most agree it is too early to tell how painful the impact could be.

But Ebo warned that if the standoff spells a prolonged drop for crude and coronavirus continues to batter the global economy then Nigeria could be heading for major problems.

"If we don't come up with policies to salvage this situation then there is the possibility for Nigeria to slip back into recession," he said.

While the outlook looks bleak there appear some crucial differences that could help Nigeria avoid some of the pain from the 2014 oil crash.

Last time around when the prices tumbled Nigeria's oil-rich Delta region was hit by a wave of militancy -- meaning daily output dropped to some 1.4 million barrels per day.

Now, the country is producing around 2 million barrels daily and insists it will boost that figure to make up some of the losses.

Still, the spiralling economic headache will ratchet up pressure on the naira national currency as talk has been building of a potential devaluation.

So far the central bank has stuck firm on supporting the currency despite diminishing dollar reserves as it looks to stave off letting the naira go free again for the second time since 2016.

But the plunge in the oil price might just push the authorities to let the naira slide.

"The central bank governor has indicated to the market that there are two variables that will determine the next move for the currency: oil prices and the level of the reserves," said Omotola Abimbola, an analyst at Chapel Hill Denham investment bank.

Crude prices are now well below the level Nigerian officials were hoping for and the reserves have slipped towards the key $30 billion threshold set by central bank chief Godwin Emefiele.

"The threshold hasn't yet been reached as reserves are at $36 billion," said Abimbola.

"But this is a shock and I expected the central bank wouldn't let reserve drop below that level before taking action."