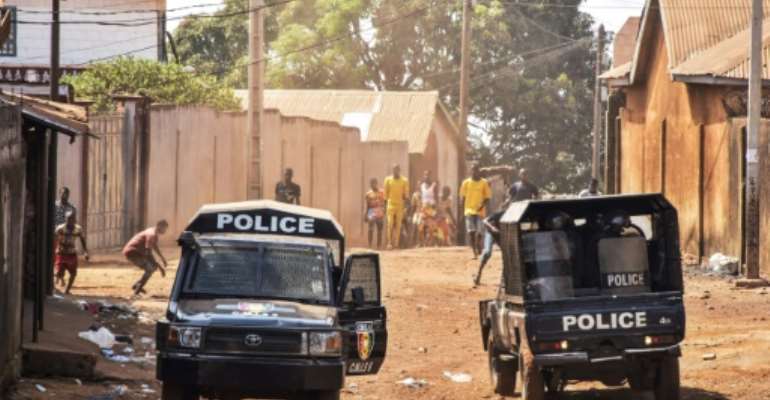 Guinea has been rocked by huge demonstrations over proposed constitutional reforms that many fear will reset presidential term limits. By CELLOU BINANI (AFP/File)

Two prominent figures from Guinea's anti-government protest movement have been charged with assault and kept in custody in the capital of the West African country, one of their lawyers said.

Guinea has been rocked by huge demonstrations over proposed constitutional reforms that many fear will reset presidential term limits -- allowing Alpha Conde to run for a third spell in office later this year.

Since the protests began in October at least 30 protesters and one gendarme have been killed, according to an AFP tally.

Ibrahima Diallo and Sekou Koundouno faced an array of charges including assault, their lawyer, Me Mohamed Traore, told reporters in Conakry on Monday.

The charges included the "production and dissemination of material likely to disturb public order and harm human dignity", he said.

The pair from the collective leading the protests, the National Front for the Defence of the Constitution (FNDC), were arrested on Friday after they gave a press conference to condemn the arrest of other activists, the group said.

Traore called the men's arrest and sentencing "arbitrary", as neither he nor the other representatives of the two men had been involved in their questioning before they appeared in court.

The two were jailed last year along with other senior FNDC figures and spent weeks in prison before their sentences were overturned on appeal and they were released.