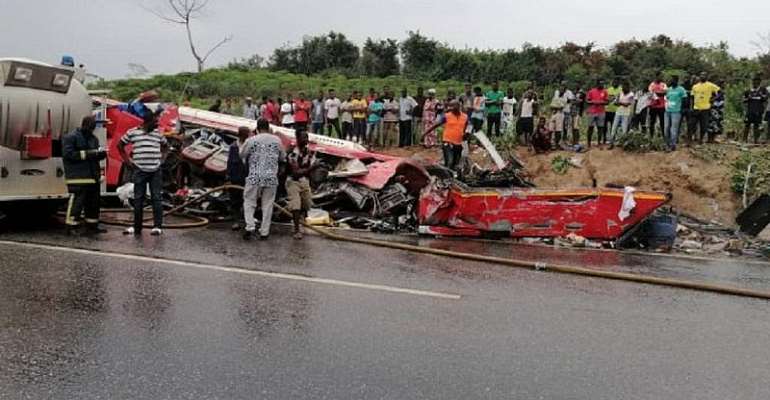 The Techiman North District Chief Executive, Peter Mensah has attributed indiscipline by commercial drivers, impunity as well as politicians to the major causes of most road accidents in the country.

According to Hon Peter Mensah, most of our law enforcement agencies, especially the Police service, Metropolitan Assemblies, District Assemblies, Judiciary, Chieftaincy, Driver and Vehicle Licencing Authority (DVLA are also found wanting because of political influence and none enforcement of laws, rules and regulations.

He said various socio-economic, political, cultural, religious and administrative factors contribute to indiscipline and lawlessness in a country.

Speaking on OTEC FM Afternoon show dubbed ‘Dwabrem’ Hon Peter Mensah observed that, day in day out, you see the same pathetic condition wherein motor vehicle drivers compete for space on our narrow roads; not only with each other but also with push-carts, bicycles (which often times travel from the opposite direction of the traffic), tricycles and motor-cycles that dangerously cut in front of everything that happens to be in their way.

"They ride through red traffic-lights; cattle crossing the road between cars without a herdsman, frequent fatal accidents due to reckless driving by unqualified and indisciplined drivers; unnecessary overtaking, driving and at the same time speaking on mobile phone (lack of concentration), over speeding, driving on the shoulders of the road; non-maintenance of vehicles, pedestrians crossing the road at inappropriate places or when vehicles have been given right of way to move," he stated.

According to Hon Peter Mensah, in most advanced countries, drivers who commit traffic offences are fined and penalty points put on their licenses. "The points are predetermined for the different categories of traffic offences. Up to a certain level of penalty points accumulated, one can lose his or her license either for a specified time or even in some cases for good."

He continued, "Owing to the socio-economic impacts that road traffic accidents generate, it deserves to be given political priority and commitment. Unfortunately in Ghana, there appears to be a lack of political will to make interventions that support road safety campaigns, such as in developed countries like the United States, Japan and Finland, where the personal commitment and interest of their heads of state in the maintenance of sanity on the roads has culminated in a drastic decrease in road accidents and adherence to road regulations.

"Most of the accidents on our highways can be prevented if drivers, DLVA, MTTU and GPRTU do their work well. When one fails to do the correct thing, it is the passenger who presents his or her body as the sacrifice to somebody's inaction. Indiscipline is the cause in most cases amongst Ghanaians, even more than HIV/AIDS," he told the programme’s host, Dr Cash.

The Techiman North DCE stressed that most drivers have high percentages of blood alcohol (ranging from 300-383/100ml), which is far above the accepted level of 2.43/100ml. "This is enough to cause motor accidents."

"MTTU statistics estimate that most accidents are caused by broken down vehicles on our roads. It is sad and disheartening to see a broken down vehicle on our highways with no warning triangle to warn oncoming vehicles. On the Kumasi-Accra and Kumasi-Tamale highways, there are enough incidents of this sort at any point in time to prove this point. The police see this and do nothing about it. They only come in when it causes an accident," he emphasised.