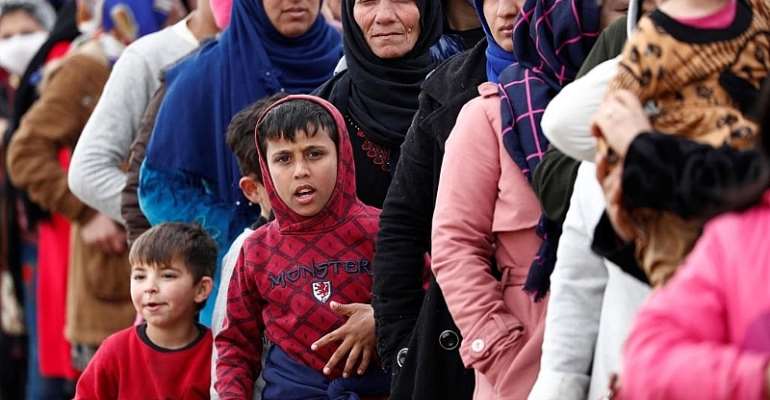 Germany says the European Union is considering taking 1,500 child refugees who are currently in Greek camps. A statement from the German government said the 1,500 would be minors under 14, or in need of urgent medical care - and that most would be girls.

The statement talks of a coalition of willing host nations but doesn't specify which countries might step forward.

Turkey's President Erdogan heads to Brussels Monday for talks with top EU officials to discuss, among other issues, the refugee situation.

Last week Ankara announced that it would no longer prevent asylum seekers trying to reach the EU from Turkey by land or sea.

That led to hundreds arriving on Greek islands and thousands trying to pull down fences at the land border between Turkey and Greece.

Turkish authorities later ordered their coastguard to stop sea crossings but thousands of migrants are still massed at the land frontier. Greek authorities said they blocked 1,646 attempts to cross the border between Sunday and Monday and arrested two people: one Moroccan and one Egyptian.

'Asylum seekers used as pawns'
Greek Prime Minister Kyriakos Mitsotakis declared he had to protect his country's borders and that he did not want to see the asylum seekers used as pawns - a clear reference to the EU view that Erdogan is using refugees in a bid to pressure the bloc. The Turkish president wants more money from Brussels, and a relaxation of visa rules for Turks.

For its part, Ankara says that the EU has been slow to disburse the six billion euros promised under a 2016 'cash for refugees' deal. Erdogan also wants the EU to resettle more refugees from Turkey.

Tonight's meeting might result in an announcement about taking some unaccompanied minors to relieve the pressure in Greek camps but a long-term solution needs to be found to the recurring problem of how to cope with asylum seekers who want to enter the EU.

François Gemenne, a specialist in migration at SciencesPo Paris and the Université Libre in Brussels, sees EU member states heading towards a new approach.

He says the bloc must forget the idea of unanimous agreement on the issue and instead create a group of countries willing to accept asylum-seekers. The countries would be given an incentive - he suggests that accepting refugees be made a "condition" of membership of the Schengen zone. Refugees would also be able to choose a preferred country for settlement under any such long-term solution.

The idea was previously floated by EU president Charles Michel when he was prime minister of Belgium.

Turkey is currently home to around 4 million refugees, most of them from Syria.