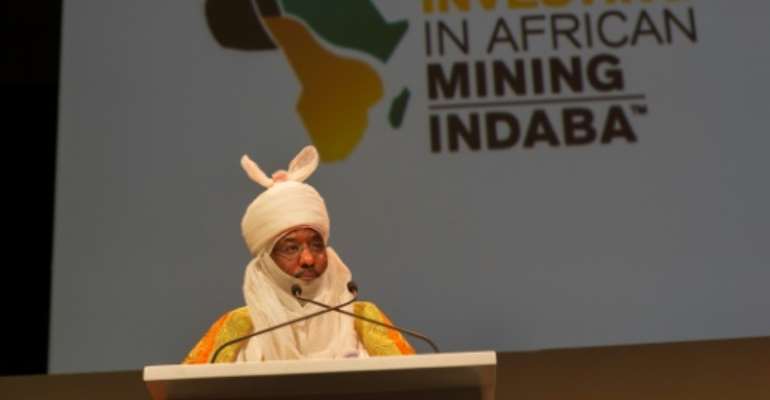 Sanusi has been at loggerheads with state governor Abdullahi Ganduje due to his outspokenness against the authorities. By RODGER BOSCH (AFP/File)

The influential traditional ruler of northern Nigeria's largest city of Kano was removed from his position on Monday after a long-running row with the authorities.

The emir of Kano is by tradition the second most senior Islamic ruler in Africa's most populous nation, after the sultan of Sokoto.

Lamido Sanusi, who ascended the throne in 2014, was accused of "disrespect to lawful instructions", the state government said in a statement.

The government said his removal was also to safeguard the "sanctity, culture, tradition, religion and prestige" of the Kano state emirate established over a millennium ago.

The authorities said a replacement would be named soon.

Sanusi, a former head of Nigeria's central bank, has been at loggerheads with state governor Abdullahi Ganduje because of his outspokenness against the authorities and allegations he supported the opposition at last year's elections.

Ganduje won re-election as governor and quickly ordered the creation of four new emirates in Kano in a bid to reduce Sanusi's control and influence.

Emirs have no constitutional role in Nigeria, but they wield enormous king-like influence over their subjects.

Their funds come from state government, and politicians rely on their support during elections.

The traditional ruler has been probed by state lawmakers for allegedly misappropriating funds meant for his office.

The embattled emir denied the charges.

Last month, the outspoken ruler accused political and religious leaders in the north of not doing enough for the region, which he said widened the poverty gap between the mainly Muslim north and the majority-Christian south.

The moves against him by the authorities have caused tempers to flare among his supporters.

The regional parliament descended into violence on Monday as lawmakers exchanged blows over a fresh probe against the emir, which the opposition rejected.

There have been no reports of protests or violence from Sanusi supporters following his removal, in contrast to previous cases.

Riots broke out in Kano in 1963 when Sanusi's grandfather was dethroned by the then northern regional government over insubordination.

Deadly violence erupted in the city in 1981 when the government queried Sanusi's predecessor Ado Bayero in an attempt to depose him.

In his earlier role as central bank chief, Sanusi earned a reputation as a straight-talking moderniser, not afraid to speak out against corruption, although he faced -- and denied -- accusations of graft himself.

He was sacked from that position in February 2014 after he accused the state-run Nigerian National Petroleum Corporation of not remitting some $20 billion to state coffers.

Mahama Installed As Development Chief Of Apesika
16 minutes ago

New Voter Roll: EC Quickly Restored My Name After I Raised A...
16 minutes ago