By Claudio Ottoni - The Conversation 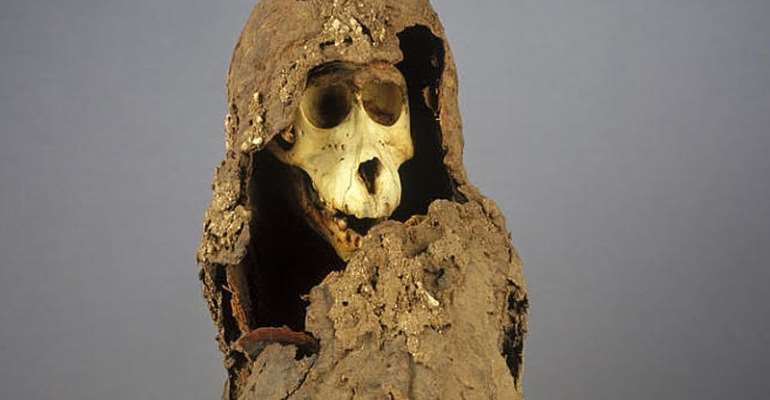 Many people know it's important to clean their teeth to prevent a build-up of dental plaque. This sticky film growing on teeth every day is composed of millions of bacteria. Over time, plaque can create mineral deposits, known as dental calculus or tartar, on the teeth. The end result can be gum disease and tooth decay .

Modern oral hygiene practices and dentistry can easily prevent dental calculus build-up. But it is hard to imagine that people living hundreds or thousands of years ago took the same oral care. That's why calculus deposits are frequently found on the teeth of ancient humans studied by archaeologists. Dental calculus has recently become a useful tool to investigate the health and lifestyles of humans in the past.

In a recent study we applied this tool to animals for the first time, when we studied the remains of baboons held captive in ancient Egypt. Our findings show that they had a distinctive oral microbiome when compared to ancient and modern humans, Neanderthals and a wild chimpanzee.

Our hope is that our study will be a starting point for more extensive studies on ancient animal oral microbiomes to examine the extent to which domestication and human management in the past affected the diet, health and lifestyle of animals. In turn, this holds great potential for learning more about interactions between humans and animals in the past.

Domestication and human management of animals are associated with deep changes in the animals' biology. They are not in their natural ecosystems, and human manipulation strongly affects their diet and breeding. We wanted to explore what dental calculus could tell us about captive animals forced to live in confinement.

The remains of animals that lived in captivity 2,500 years ago in Egypt provided a good case study.

The research was also a test of the technique of DNA sequencing of dental calculus. It showed that dental calculus, unlike other tissues, preserves ancient microbial DNA well even in hot regions.

We analysed the dental calculus of baboons in captivity – using samples from both recent and ancient times – and found similarities in the kinds of microbes found in their mouths.

The ancient baboons were mummified specimens dated to the late Pharaonic era, collected at the Musée des Confluences of Lyon, in France. The specimens originated from the site of Gabbanat el-Qurud, near Thebes, in Upper Egypt. They were held captive in unknown structures, possibly near or in temples.

Baboons are not native to Egypt. Ancient texts and iconography show that Ancient Egyptians undertook expeditions south of the Nile Valley and to the “Land of Punt”, which was most likely in East Africa or in the Arabian Peninsula. Puntites traded valuable goods and exotic plants and animals, including baboons, which were brought to Egypt, kept as “sacred animals” and associated with the cult of Thoth.

Despite their symbolic value, their life in captivity seems to have been far from ideal. Evidence of hand and foot fractures suggests that the Egyptian animals were subject to harsh treatment and suffered from poor health conditions, as was also demonstrated by another study of ancient wild animal remains from another site in Egypt.

We also showed that one of the baboons suffered from oral infections, most likely due to Actinomycetes bacteria, which damaged its skull.

We know this because of what we learnt by sequencing the DNA of the bacteria trapped in the dental calculus of the baboons. These ancient animals possessed a distinctive oral microbiome (the composition of the mouth's microbial DNA). It was different from that of a wild non-human primate, a chimpanzee, and of ancient humans and Neanderthals who foraged for food, like the baboons in their natural wild condition. This may suggest that captivity influenced the oral microbiome of the baboons. Right upper jaw of a baboon (number MNHL 510000509), clearly showing the dental calculus (red arrows) on the two premolars behind the canine. © Wim Van Neer.

Baboons are opportunistic and very flexible eaters, yet they are strongly dependent on natural resources for proteins, minerals, vitamins and even medical chemicals. It has been observed that traditional nutritional management adopted today for baboons in zoos are based on a diet that is low in fibre and rich in simple sugars (such as fruit). This high-quality food provisioning has social implications in the captive groups, leading to food-based dominance, increased aggressiveness and immunodepression, resulting in dental disease.

Similar factors may have come into play in ancient Egypt, causing a disruption of baboons' social patterns, overall health depression, and changes in their oral microbiome.

We also found in one ancient Egyptian baboon and in one of the two modern zoo animals a bacterial species that was probably transmitted by humans, Methanobrevibacter oralis. It was recently found also in the mouth of Neanderthals . More research will help to unravel whether this species occurs naturally in baboons. But we believe they may have acquired it in captivity from humans, for example by sharing food. It's also possible that it was transmitted by humans to baboons when they were pups being reared in captivity.

Future studies of oral microbiomes in ancient wild and captive primates will help to shed further light on the effects of captivity conditions on animal oral ecology.

Our study demonstrates that dental calculus is a powerful tool to unravel human-animal interactions in the past, including domestication and other forms of animal management.

Stéphanie Porcier of the Laboratoire CNRS “Archéologie des Sociétés Méditerranéennes” (Université Paul-Valéry, Montpellier) contributed to this article and the research it is based on as a co-author.

Claudio Ottoni does not work for, consult, own shares in or receive funding from any company or organisation that would benefit from this article, and has disclosed no relevant affiliations beyond their academic appointment.